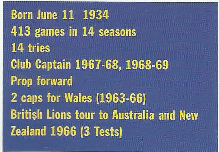 Charles Howard Norris was prepared to make any sacrifice to play for Cardiff. He would even risk his job in the days when the top players worked by night or day Monday to Friday, fitted in a couple of training sessions and then played twice a week on Wednesday and Saturday afternoons.

‘When I left St Luke’s College, Exeter I started teaching in Cadoxton and was quite happy there until one fateful day I asked if I could leave at three o’clock to join up with the Cardiff team going to London by train for a floodlit match with the Harlequins. I didn’t think there would be a problem because I wasn’t teaching a class for the last lesson that day – so I went. Imagine my surprise when I got back to find I had been suspended for four weeks and the full weight of the redoubtable Alderman Llewellyn Heycock, Chairman of the Glamorgan Education Committee, was on my case!’

To cut a long story short, Cadoxton’s loss was Llanharan and then Llanharri’s gain.  For Howard Norris was a gifted teacher, admired by pupils and colleagues, and a long and professional career blossomed. As did his career and reputation with Cardiff Rugby Club as he achieved his life’s ambition. 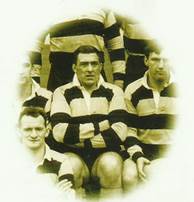 ‘Let’s make no bones about it’ said Howard, ’Cardiff was the only club for me. I was brought up in the Rhondda and Wells and Kingsley Jones were near neighbours. Gordon was a star in the Porth County School rugby team when I was still in my first year there, but these fellows were my heroes as well as my friends and gave me a goal to aim for.’ And nothing would deter the young Howard Norris. After winning Welsh Secondary Schools caps in the second row alongside Roddy Evans, and with the future Cardiff club-mates Meirion Roberts and Cyril Davies in the centre, Howard went to St Luke’s and, true to form, turned down a lucrative job offer in Exeter before returning to South Wales.

‘ I had played in the Club trials in August 1953, again with Roddy Evans, and got a game with the rags at Usk before going to college, and then I went into the RAF but I always knew that one day I would try again to get into the team on a regular basis,’ admitted Howard. That day finally came in September 1958 and Howard recalled how he heard of his first selection. 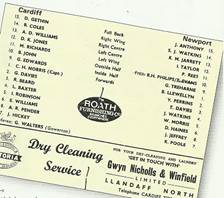 ‘The Club captain that year was CD Williams and he went out of his way to see me and tell me personally that I was picked for Cardiff – what a wonderful thing to do.’ The first game was against Penarth and Howard remembered the pack that played that day: ‘JD Evans, Billy Thomas and Colin Howe in the front row, Roddy ( almost inevitably!) and Peter Goodfellow in the second row and me packing down with John Nelson and CD in the back row – what a start for me – I was so proud!’ 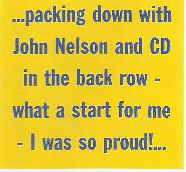 Howard Norris clearly made a big impression because he then played 34 of the remaining 37 games that season, an exceptional record for a Club debutant. It was a case of beginning as he meant to continue as for the next 12 years he rarely played less the 30 Club games a season; indeed he thought nothing of playing in 44 of the 49 official games in 1964-65, an incredible achievement for someone who was by then a prop forward.

‘Yes,’ he said, ‘it was a long career, but a happy one. I actually played in all three rows of the scrum before gaining my caps and a Lions tour as a prop and I also had, I think, the unique distinction of playing for Cardiff against all four major touring teams, including the Springboks twice.’ Such was Howard’s commitment to the Club that ne said his Welsh and Lions caps pale into insignificance alongside the honour of captaining Cardiff and breaking the career appearance record at the time.

‘Of course it was wonderful to play for Wales and of course it was a great experience to tour with the Lions in 1966 and be good enough to play three tests against the All Blacks. I was also tremendously proud to lead the Barbarians pack against the unbeaten All Blacks at Twickenham in 1967 and we only lost in injury time. There were five Cardiff players – Gareth Edwards, Gerald Davies, Keri Jones, Barry John and myself – in the Baabaa’s team that day and we all wore our Club socks. And yet to be part of the Cardiff set-up for so long, with successive committees made up of ex-players for whom maintaining the Club’s reputation and standards was paramount and the most important thing to me.’

Howard Norris was a caring and generous man, one who would break off from talking about his own career to extol the virtues of opponents as much as team-mates. Mention Newport and a broad smile would come over his face. ‘I have a tremendous affinity with the Black and Ambers. Like us they were inspired by individuals as much as their history. Dai Watkins – a great and lovely man when he was tormenting us, especially Dai Hayward, on the field of play; Des Greenslade was the best tight-head I ever propped against; and Bryn Meredith, what can you say about him – what a hooker! But they almost ruined my life in 1696 when they won the first three games and I was captain. I pleaded with the boys before the fourth match, ‘Please don’t let me down…..not me…. Not the first Cardiff captain to lose to those Black & Ambers b—s four times’ and they didn’t let me down – a glorious 9 all draw.

For his part, Howard Norris never let anyone down as he carried the Cardiff flag to the four corners of club rugby in these islands. It was no surprise when he devoted countless hours to committee work after his retirement. And it was absolutely no surprise to anyone when he was a hugely popular choice for the first Hall of Fame.