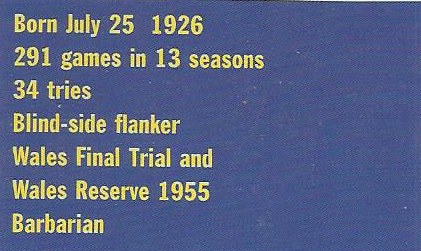 As John Nelson about what his long association with Cardiff rugby club means to him and he is likely this come out with C’est manifique. He is unashamedly proud of his years as the most reliable of club players when, he says “all our opponents from whenever wherever club and whatever ability were treated with equal respect” and then his long period of unstinting service as a committee man and his duty, as he sees, it to maintain the heritage of the club and the game.

And yet he almost never got the Arms Park at all. I had played for both London Welsh and Eastern Counties and after leaving the Royal Navy applied for a Cardiff trial. There was a mix-up about my address the selection card was sent to HMS Ganges. But I turned up on spec and has luck would have it I managed to get a game even though there were 92 budding Blues & Blacks hoping for a game. 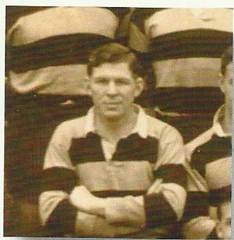 So in September 1948 J.D. Nelson made his first-team debut against Bristol. “For me it was a dream come true having been a Cardiff boy educated at St Illtyds and being very aware of everything the club stood for in the world of rugby. From that day to this he has taken the responsibilities of representing the club very seriously and no one has ever doubted the style and standards he has maintained.  Invariably immaculate in dress both on and off the field at 6’1″ and weighing in at just over 13 1/2 stone John cuts an impressive figure. At first he played both open side and blindside in the back row and often packed down at number eight with the redoubtable Welsh cap Gwyn Evans at open side. By the end of his career here played in no less than six different positions for the club “As well as the three roles in the back row I had a game on the wing another full-back. But it was one at scrum-half I remember most. We want to the north-west by the time we played Sale we had run out of scrum-half’s. I was press-ganged into playing there with the Jack Matthews as my partner. I must have done something a right because we won the game!”

By the early 1950s however John was an established first choice wing forward and part of the pretty effective back row unit. “I think we had a perfect blend; CD Williams was open side and he was the all-round athlete and tackler who could disrupt the best midfield opponents. Sid Judd was in the middle and what a player he was breaking through a tackle or cutting through the back of the lineout, and I was supporting player with a bit of pace. I it was great fun playing together.”

The unit was put the ultimate test in November 1953 for the famous game against Bob Stewart’s All Blacks. “I was confident that we would do well under Bleddyn’s leadership but left nothing to chance – I trained beforehand for twenty-two consecutive days which was unheard of at the time”. History relates that all the preparation was in a good cause the back row playing no little part in the club’s historic 8 points to 3 victory.

It was obviously a red letter day in John Nelson’s playing career and the following year he almost went one step further with a Welsh cap – but not quite. “It was a bit ironic really because after all the years of toil and sweat I got into the Welsh trial matches on the back of a try scored against Neath by outpacing their flying wing Keith Maddocks. Apparently this impressed the big five no end but when I got the final trial in January 1955 I didn’t quite do enough to dislodge the Probable’s back row of Gwyn Davies, Sid Judd and Clem Thomas from the Welsh XV

“I had also marked Rex Willis and Cliff Morgan and that was a challenge for anybody” Even so John had done well enough to be a reserve for Wales against England and Ireland that season and other representative honours followed.

A great admirer of the Barbarians and all they stood for he was delighted to accept an invitation to play for them on their Easter Tour Wales in 1958. First against Penarth and then against Newport. “Imagine the satisfaction from me, an out and out Blue & Black, to play for the Baa-baa’s against those .so-and-so’ is in Black and Amber!” is how we jokingly remembers it.

Twelve months later with nearly 300 games Cardiff under his belt John Nelson hung up his boots. He was not finished with rugby as he was soon recruited to the BBCs Saturday night ‘Sports medley’ programme, for which his authoritative and distinguished voice was ideally suited, and he was of the club’s most loyal and hard-working committeemen. No Hall Of Fame would be complete without the qualities represented by J.D. Nelson.