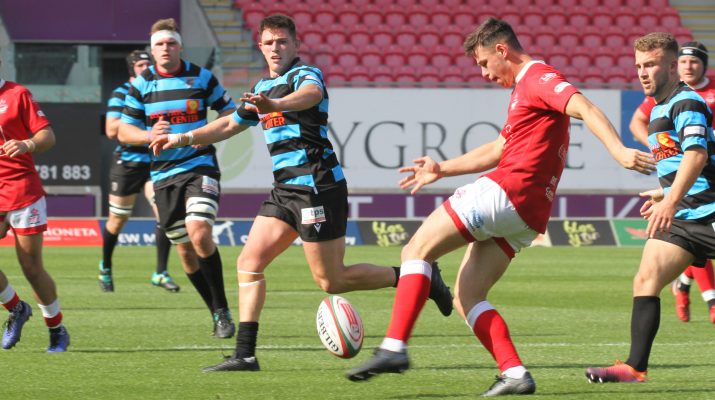 Cardiff secured a bonus point win against Llanelli In the sunshine at Parc-Y-Scarlets.

The Blue & Blacks made heavy going of the opening quarter, and it was Llanelli that had the early chances but Cardiff’s defence was up to the task. The visitors should have scored when a break by Barney Nightingale opened up the home side but with the line begging the last pass went to a Llanelli player and the chance was lost. Shortly after the same fate befell Zach O’Driscoll who broke for the line, but his inside pass to Thomas Davies was picked off by a retreating Llanelli defender.

The home side then went on the attack. Several penalties were shunted into the corner but on each occasion the attack was repelled and the lines cleared. The visitors were creating chances though and even though they missed out on the far side of the ground they did get the first score of the game when Ben Williams freed Barney Nightingale. He showed his strength to power over, Gareth Thompson converted. Llanelli hit straight back when fullback Tom Rogers found space to cross. They scored a second just before half time when Nathan Hart went over to send the home side in 10-7 up.

The second half opened with the Blue & Blacks on the attack, but Llanelli defended well. But they couldn’t hold the Blue & Blacks out as wave after wave of attacks came at them. Eventually Sam Beard exploited the space to score his first try for Cardiff, Thompson added the extras. That lead was increased as Leon Andrews intercepted a midfield pass. He linked up with Gareth Thompson and Sam Beard before Tom Habberfield added his name to the score sheet.

The bonus point try came with five minutes left on the clock. Pressure on the Llanelli defence forced a line-out and several pick and drives later Morgan Allen crossed. In the final move of the match Tom Habberfield dived over for his second try of the day, with Thompson was unable to convert the difficult kick, but a bonus point win away from home was a great result for the Blue & Blacks as they went top of an albeit early table.