There is no substitute for good timing, and Lloyd Hugh Williams’ entry into the Hall of Fame coincided with his fiftieth year of service to Cardiff RFC. ‘ I played for the Rags for one season in 1951-52, then 12 years with the first team, then 26 years on the committee, and now I’ve had the great honour of being a vice-president for eleven years’ said a very proud man at the time of his induction. He first can to fame as a fifth of the eight brothers to play in the Blue & Black and went on to be a quality player and captain of Wales in his own right. 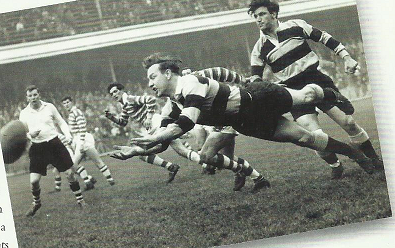 Mention Lloyd Williams to anyone who saw him play and they will immediately recall his lovely dive pass from the base of a scrum or lineout, his remarkable strength around the fringes of the pack that earned him the title of ‘ninth forward’, and, more than anything his courage in every game he played.

Breaking into the Cardiff team at scrum-half in the early 1950s was no easy thing, even for Lloyd Williams, who won the Dewar Shield with Cardiff Schools and played for Wales Youth against France and was good enough to represent Combined Services. ‘At that time the first choice was of course Rex Willis and his very capable deputy was Brian Mark, so I knew I would have to wait for my chance’, remembered Lloyd. The first team debut eventually came in September 1952 against Nantes and Cognac and then the first of many memorable games against Newport. In the following seasons he made seven, ten, eleven and fifteen appearances, enough to gain valuable experience and build a steady reputation for himself, but never quite enough to win the first team cap awarded for 20 games a season.

But even in those formative years there were days to remember, include the near miss to end all near-misses. ‘A letter arrived in the post one day in November 1953 from the Club secretary Brice Jenkins. It contained a card that said. ‘You have been selected to play for Cardiff against New Zealand….’ But before I could give a cheer I suddenly spotted a hand written addition in the bottom corner saying ’Reserve’!’ Rex Willis was, of course, the scrum-half in that famous win, but Lloyd would one day play his own part in the history of the Club’s games against touring sides. Meanwhile, another significant match that he was certainly very much part of occurred in March 1956. Newport were chasing their first-ever fourth win in a season against their arch rival and at the last minute Willis withdrew with an injured shoulder. Into the Rodney Parade cauldron stepped Lloyd Williams. 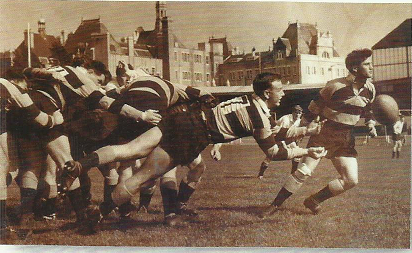 ‘It’s a match and a day I will never forget’ said Lloyd. ‘I thought I’d be playing for the Rags against Senghenydd that day but found myself in a situation where Newport had a dozen bottles of champagne lined up and I had the responsibility of supplying our key man Cliff Morgan with the ball.’ It was a challenge that Lloyd proved equal to. Though six points down early in the match and the Newport back row hounding Cliff at every turn, Cardiff recovered firstly through Lloyd’s break that gave Eddie Thomas a try and then another swift pass from him that allowed Cliff to put Gordon Wells over for a second score. With both tries converted Cardiff held on for an unlikely win – and Newport had no use for the champers. Instead reports at the time suggested that ‘Cardiff should have collared that bubbly and toasted their young scrum-half.’ Cliff Morgan certainly did for as he left the field he put his arm around Lloyd’s shoulders and said, ‘Thank you – you helped make this victory possible.’

Less than a year later, Cliff Morgan and Lloyd Williams were running out together at Murrayfield as Wales’ half-backs against Scotland. To complete the happiest of stories it was his big brother Bleddyn who gave Lloyd news of that first cap. ‘I had just returned from playing for Cardiff in Aberavon and was in the foyer of the Athletic Club when Bleddyn phoned JBG Thomas at the Western Mail then came over to me and said ‘You’re playing for Wales next week’. It was a very emotional moment.’ Lloyd was to partner Cliff in his final seven games for Wales but shortly after Cliff retired Lloyd found himself in the international wilderness.

‘I didn’t play for Wales for two years then one day there was a knock on the door and there again was Bleddyn – always bringer of good news. ‘You’re back in the Wales team in Paris on Saturday’, he said, ‘and you’re captain!’ This time I really did have to sit down.

It was hardly surprising that Wales turned to Lloyd Williams for leadership because for two seasons from September 1960 he was an outstanding club captain. He took his team into the ill-fated struggle against the Springboks that year unbeaten after 13 matches, and in eight matches against Newport under his leadership the Club won five a drew three. The great landmark though, was against the Barbarians in 1964 when he reached his 300th First Team appearance and the Club celebrated in style with a magnificent 21 points to three victory. Six weeks later he took his bow for the final time, with 310 games and another 64 for the Athletic XV to his name.

‘In fact, said Lloyd, ‘I once worked out that between the eight Williams brothers played 1480 games for the Club.’ Some record.