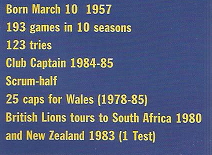 In every rugby club there are players who through a combination of factors, whether commitment, loyalty, innate ability, courage or simply their background, touch the hearts of both the most fervent and the most occasional supporters. Such a man was Terry Holmes. In his time at Cardiff Arms Park he showed not just some but all of these qualities and many more. He commanded a respect and admiration that few have equalled in modern times and even when he left Wales in 1985 to try his luck at rugby league he went with the best wishes of the entire rugby community of the city ringing in his ears.

But the Terry Holmes story started more than ten years before that. He had already played for Cardiff Schools at under 11 and under 14 levels and played for Wales Schools at Twickenham when still at Bishop Hannan School before he graduated to Cardiff Youth and further junior international honours. He was only 17 and a half when he was called up for the toughest of senior debuts against Newport at Rodney Parade and it didn’t get any easier nearly a year later when his second match was at Pontypool Park.

But from the beginning it was obvious that the young Holmes was a bit special. In 1974 Gareth Edwards was still playing and would be there for another four years. Brynmor Williams was also knocking on the door, but Terry was a bit different to both of them. Bigger for a start.  At six foot one inch and comfortably in excess of 13 stones he offered a physical threat rarely seen at the base of the scrum. He was much more, though, than a big hulk and as the years went by his all-round ball skills became more apparent. Under the high ball he was immense and his tackling became legendary. With a smile on his face Terry still claims his partnership with Gareth Davies was so effective because ‘He did the kicking and I did the tackling1.’ In one International at Murrayfield he made over a dozen tackles as the Scots tried everything to break down the Welsh defence. They didn’t and Wales won 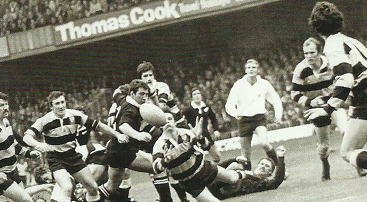 Terry Holmes also became a great reader of the game. He captained both his club and country and nothing personified his astuteness more than a game at Leicester two weeks before we went north.  ‘We were controlling the first half but had some inexperienced backs who were failing to get anywhere against guys like Paul Dodge and Dusty Hare. So at half-time we decided to turn it into a nine man game. With Whitefoot, Alan Phillips and Eidman in the front row, Bobby Norster controlling the line-outs, and Bob Lakin and Mike Teague at the back we fancied our chances – and it worked a treat. Our backs didn’t see the ball for 40 minutes but we got three tries, including two by me from short range scrums which Dean Richards didn’t like one bit!’

The inevitability of unstoppable tries from short range became one of Terry Holmes’ trademarks. Opponents at all levels, whether in club or international rugby, seemed helpless against his power and his strike rate of 123 tries in less than 200 games speaks for itself. And all at a time when Terry was developing as a player, he was maturing rapidly off the field. After his retirement he was to write’ Only now, much later and I hope a little wiser, do I fully realise and appreciate what it meant to me to join Cardiff and how much it influenced me.. I was given guidance and a sense of purpose; and in a sense the many gaps in my education were filled by mingling with and listening to the people who made the club such a vibrant, compelling place – players, officials, ground staff and supporters.’ 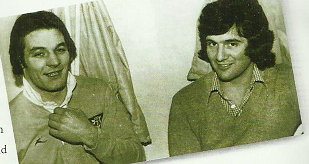 There is little doubt that Terry Holmes was close to all things Cardiff and, as he said at the time, ‘The only way I could give anything back to Cardiff was to do my best on the field.’ Which is what he certainly did as by the Eighties the formidable team built around himself, Gareth Davies, John Scott, bob Norster, Alan Phillips and Alan Donavan – but somehow in total much bigger than its constituent parts – took shape. ‘Playing in that team at time was a good as it gets,’ he still believes. ‘ We were a team on and off the field with a huge respect for one another. There were many strong personalities amongst us but for the good of the team the Club always came first.’ 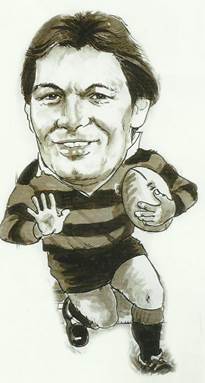 Terry Holmes signed professional forms for Swinton when he was captain of Wales and at the height of his powers, but no one begrudged him a penny of what he received. Well-wishers from the city and beyond drove north to see his league debut but he was to be bedevilled by the injuries that has occasionally interrupted his early career and cost him several caps and the glory with the Lions overseas. But a Cardiff Rugby Club no one questioned that he was one of the Club’s greatest players: he was a son of the city who rose to the top and his entry into its Hall of Fame was never in doubt.