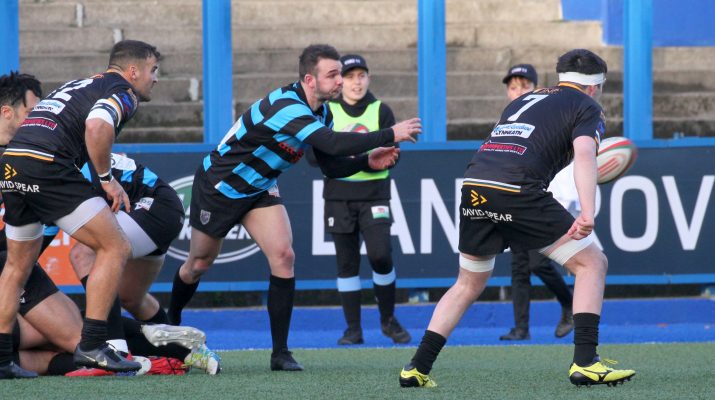 Cardiff maintained their unbeaten record in the Indigo Premiership with a hard- fought win over defending Champions Merthyr.

The first quarter of the match was spent with both sides try to find a way to break down the opposition defence. Both teams denied each other any space and time on the ball as they came off the line to break up any attacks.

It took nearly half an hour to break the deadlock, but when it came the first try was worth waiting for. Cardiff moved a lineout into midfield where Leon Andrews and Max Llewellyn combined to give Edd Howley space. The fullback beat his man and put in a delicate grubber which bounced kindly for James Beal, The winger though still had a bit to do but outpaced the defenders to score in the corner. Gareth Thompson expertly landed the touchline conversion. Matthew Jarvis and Thompson exchanged penalties shortly after but Merthyr were putting on immense pressure on the Blue & Blacks, and when they were reduced to fourteen shortly before half time a score looked likely. Having spurned three easy points, the Ironmen went for the corner. Wave after wave came at Cardiff, but the defensive effort one man down was outstanding, as it had been all half, and eventually the ball was turned over and hammered into the stands for a 10-3 half time advantage.

The second half was equally as hard as the first. Cardiff though looked the more likely to increase their lead as they took the game to the Ironmen. The second try came with 12 minutes left. If the first try was a team effort this one was an individual one. Cardiff’s back row had given Merthyr a torrid time at the breakdown and when Alex Everett pounced at a ruck in his own half, he spotted a gap that he raced through. The speedy flanker – who was named as man of the match- was not touched as he powered over the Merthyr line for a try Thompson converted. The game was sealed a few minutes later when Thompson slotted a penalty and give the Blue & Blacks twenty points to three win and maintain a healthy lead at the top of the Premiership.