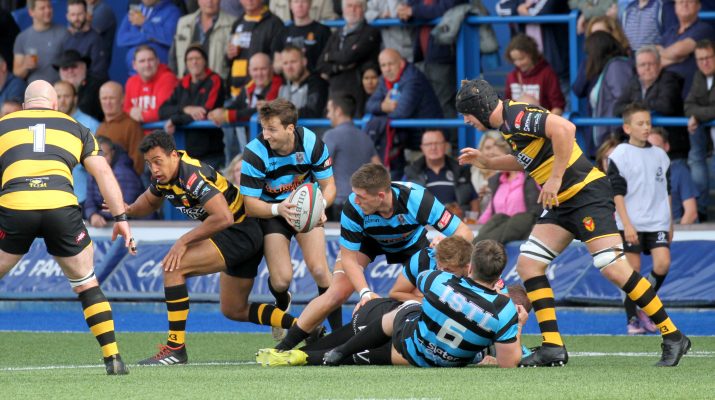 Cardiff won a pulsating game at the Arms Park against the oldest enemy. In the 436th game between the two sides the first ten minutes were spent getting to know each other as neither side could take control.

Cardiff were to get on the board first. After moving out of the twenty-two they were awarded a penalty near the half-way line. Quick thinking outside-half Gareth Thompson spotted a gap in the defence, took a quick tap and in a flash was under the posts for a try he converted. The Black & Ambers were soon on level terms, however, as Cardiff coughed up the ball from the restart. Wing Harri Lang crossing in the corner for a try Matt O’Brien converted.

The Blue & Blacks so grabbed the lead back. This time Bleddyn Davies, who with his centre partner Joe Gatt was a thorn in the Newport defence all afternoon, went through to link with man of the match Tom Daley who dotted down for try number two. O’Brien got a penalty back for the visitors before Gatt himself extended Cardiff’s lead. This time a combination of back and forwards leading to the try.

Newport were to go in at half time ahead as an O’Brien penalty and a try for Johnny Morris after an interception sent the Black and Ambers in one point up. Thompson swung the scoreboard Cardiff’s way early in the second half but the lead that was changing hands constantly did so again as Chay Smith slipped a tackle to score,

It was going to take something special to win this game and the winning try was to be that moment. Cardiff broke from their own twenty-two when powerful running by Matthew Powell and Morgan Allen sent them to halfway. When the ball was sent wide Llywarch Ap Myrddin was on the wing to round the final defender for a score that Thompson converted.

There was still at least ten minutes left and with a two point advantage Cardiff drove deep into the Newport half looking to kill the game off. The visitors stole the ball, though, and for the final minutes battered the Blue & Black line. But the defence held firm and when the ball went forward they happily sent it out of play for a well deserved and much needed bonus-point victory.