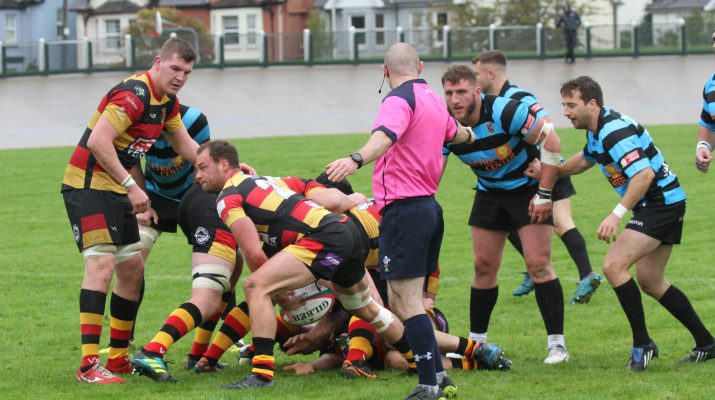 Cardiff came away from Carmarthen Park with just a losing bonus point to show for their effort.

In a reversal of the end of last week’s game it was the Blue & Blacks who were battering the Quins line for several minutes looking for the winning score rather than defending. The result though was the same. It had started brightly for Cardiff. Playing into the win and drizzle that was coming down the Blue & Blacks controlled the ball for the opening minutes, but the final product wasn’t coming. Stefffan Jones landed a penalty to start the board moving, this was cancelled out by Aled Thomas a few minutes later.

The first try came after sustained pressure from the Blue & Blacks. After spending several minutes in the Quins twenty-two they were awarded a penalty, but with a free play on offer Jones popped a great chip over the up-rushing defence that Will Rees-Hole gathered inches off the ground before dotting the ball down under the sticks, Jones added the extras.

The rest of the half though was spent defending. Thomas landed two more penalties to send the home team in just a point behind. Cardiff could have been behind,  but the defence stood up and repelled most of what the home side had to offer.

With the conditions unchanged after the break the ball became very greasy. Quins were having much more of the ball but couldn’t really get anything going. But Cardiff’s line-out was malfunctioning allow the Quins to steal ball in good areas of the pitch. A Cardiff infringment allowed Quins to take the lead from another penalty, but Ii took 26 minutes of a scrappy second half for the the home side to put teh game out of reach. Nick Reynolds scoring a try in the corner which Thomas converted putting the home side two scores clear.

That seemed to spur Cardiff on and for the last quarter of the game they attacked relentlessly. Quins repeatedly gave away penalties allowing Cardiff to get close to the try line. When they were given a kick in front of the posts they took three points and went back to regroup for the kick off. Again Quins were penalised and the ball was put straight back into the twenty-two. For five minutes the Blue & Blacks pounded the home try-line but were repelled. Penalties kept coming but three points were not enough and so the pick and drive was used. It nearly paid off but when the ball got trapped in a maul the Quins were awarded a penalty which was hoofed off the pitch to win the game.