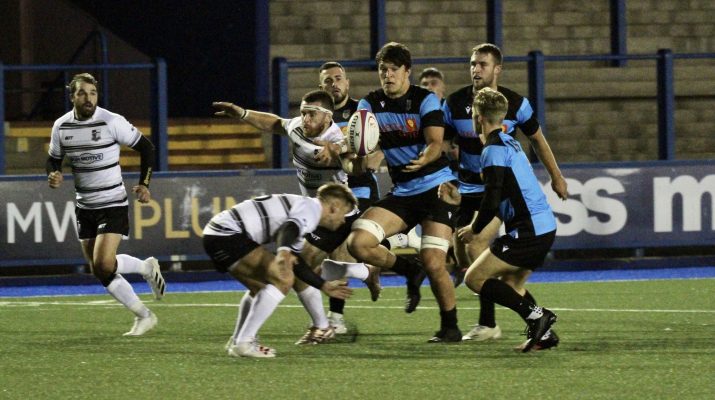 Tries from Aled Summerhill (2), Harri Millard and Man of the Match Dan Fish saw the Blue and Blacks to a well earned victory over Pontypridd in the latest round of matches in the Indigo Premiership Cup.

The first quarter of the game was spent with both sides looking to gain an advantage and both defences being tested, but not broken. Pontypridd were first on the board when Ben Burnell slotted a penalty. Jacob Beetham replied for the Blue & Blacks a few minutes later.

The first try came midway through the first half. The visitors had been reduced to fourteen men after a deliberate knock on and Cardiff took full advantage. A penalty move from a lineout was stopped, but when the ball was recycled and moved wide a half break by Ioan Evans nearly made the line. He was stopped but the ball was moved out to Dan Fish who took two Ponty players over the line with him. Beetham added the extras from wide out.

The second try followed shortly after. A sweeping move flowed from the half way line stretching the Ponty defence to the limit. Eventually they ran out of cover and Aled Summerhill stepped between two defenders to score under the sticks. Beetham again added the extras for a 17-3 half time advantage.

The second half was a stop-start affair. Dale Stuckey took advantage of a Cardiff mistake to score for the visitors, but Cardiff struck back almost immediately. Ponty cleared their lines from the kick off only for it to be sent back into the visitors twenty-two. Cardiff reclaimed the ball and went through several phases that went from one side of the field to the other. That created space that Fish exploited to send Summerhill over for his second try.

Pontypridd didn’t give up and a catch and drive in the Cardiff twenty-two headed towards the home line. When it was stopped illegally referee Davies had no option other than to award a penalty try and a yellow card. That left the visitors one score behind, but the Blue & Blacks were to seal the game with ten minutes left. Beetham spotted a gap and when he powered through Harri Millard was in support to beat the last defender and dive over. Beetham added the extras and the Blue & Blacks had another bonus point win.