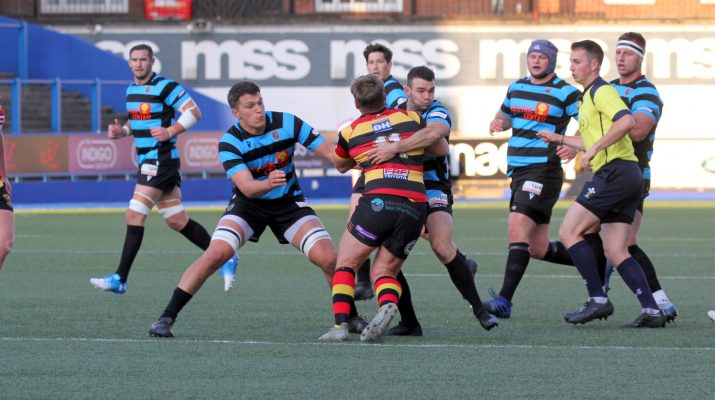 Cardiff maintained their 100% record so far this season with a bonus point win against Carmarthen Quins at the Arms Park on Saturday.

In front of the television cameras, the Blue & Blacks gifted the Quins an early try. Having made most of the first few minutes a loose pass was eagerly picked up by the Quins. A few phases later and they were over the Cardiff line for a converted try.

That seemed to spur the home side on and the scores were level a few minutes later. Pressure had yielded a scrum near the Quins line and after a few pick and goes a neat slip pass by Tom Habberfield sent Alex Everett over. Ben Thomas added the extras. And Everett was to get his second shortly after. A penalty was shunted into the corner, and instead of a catch and drive Cardiff pulled a move off the lineout, Everett peeling round collected the ball from Morgan Allen, who had the first charge, and crashed over for a second converted try.

The Blue & Blacks should have increased the lead several times before half time, but the final pass always seemed to go astray. In fact the Quins had the last say in the half as they landed two simple penalties to go in 14-13 down.

At the beginning of the second half the Blue & Blacks were looking to be more creative, and they were rewarded six minutes in when an advantage was used well by Dan Fish. His chip over was expertly collect by Ben Thomas to dot down. The TV match official was called into action to check for offside, but the try was awarded and Thomas again added the extras. And the bonus point try soon followed. This time a Quins mistake was punished, Cardiff driving through onto the ball under the Quins posts. A couple of drives later and James Thomas was over the line for a try Gareth Thompson converted. And he added six more points with the boot as two penalties put the game safe. Quins though did have the final say as a break away led to the final try of the game. But it was too far back as the Blue & Blacks triumphed 34-20.