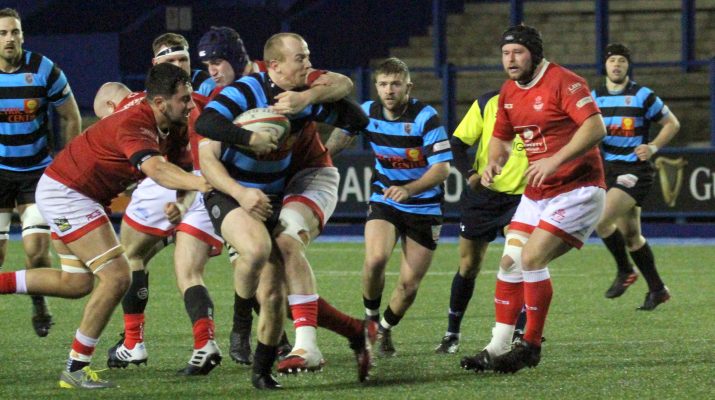 Cardiff got back to winning ways as they secured a bonus point win against Llanelli at the Arms Park.

Before the game both teams and the mascots – Henry Parker and the Caerphilly Panthers – stood in memory of Lee Taylor who sadly passed this week. Cardiff made the better start and it looked like they were on the scoreboard first. A driving lineout from a penalty was pulled down and referee Craig Evans went under the posts and awarded a penalty try and a yellow card. But a review by the TMO spotted a Cardiff offence and both the try and the yellow card were scratched off.

The next quarter of the game belonged to the defences, both sides wanted to move the ball but they were shut down on every occasion. It was 23 minutes in before the first score. A break by Jason Harries set Ioan Davies free. He fed James Beal who was hauled down short. The support was there though and a few pick and drives had sucked in the Llanelli defenders. Two simple passes and Davies was able to finish off a move that had started in the home twenty-two, Thompson added the extras.

Llanelli outside half Ioan Hughes was wide with a penalty kick before Cardiff scored again. A lineout was stopped near the Llanelli line, but when the ball was spread Thompson put Max Llewellyn in space. The centre powered over for Cardiff’s second try.

If the Blue & Blacks thought it would be more of the same in the second half they were made to think again. Whatever was said at halftime inspired the visitors and within seven minutes they were level. Two bursts up the middle provided them with tries for Tom Rodgers and Dane Blacker, both converted by Hughes. But Cardiff were getting back on top up front. Another penalty went to the corner but was dragged down. The ball was recycled several times but the visitors simply couldn’t stop the Blue & Black advance and eventually Harries powering over under the sticks. The bonus point try came a few minutes later. From the restart a dangerous tackle on Max Llewellyn saw Llanelli reduced to fourteen men. Cardiff gained the upper hand and won a lineout near the visitors line. This time the catch and drive worked with Evan Yardley getting his hands on the ball to score a try that Dan Fish converted.

Cardiff dominated the last quarter but only managed to get one more score. A long period of attacking and phase play led them to the corner. When the ball came back towards the posts man of the match Morgan Allen was on hand to finish things off. Fish converted and the Blue & Blacks were back to winning ways.