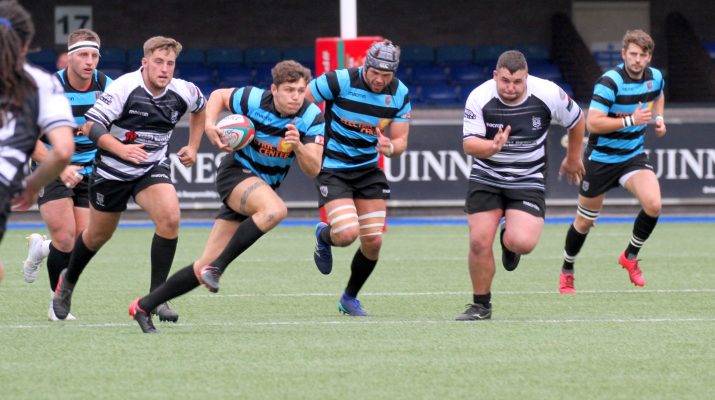 Cardiff won a see-saw battle with Cross Keys at the Arms Park that wasn’t settled until the last kick of the game.

The two sides shared ten tires, five each, but it was the kicking that made the difference. Keys scored the first after a Cardiff mistake. Attacking deep in the Keys half the ball went loose and when the visitors went straight up the field scrum half Dan Babos has on hand to finish the move under the posts, Jason Tovey converted. Cardiff came straight back. A penalty was pushed into the corner and from the lineout the rolling maul saw Joey Tomlinson at the back to score, Steffan Jones converted.

The visitor were next to score. This time from a lineout of their own, but it was winger Wes Cunliiffe who was at the back to touch down. Keys went further ahead when an interception pass was run in by Ian Newbury from his own 22. Tovey converted the first but was wide with the second.

Cardiff needed a response and it came from the captain and again the rolling maul. On two occasions Keys were penalised and the result in both cases was the same. The ball shunted into the corner and the catch and drive resulting in Tomlinson’s second and third tries of the game. Both converted by Jones. But Keys went in at half time 24-21 ahead after Srdan Majkic’s try, again the kick going wide.

Cardiff came out of the half time team talk with a bit more purpose and were rewarded with a bonus point try of their own. Matthew Powell, who seemed to be everywhere on the pitch was on the end of a break that saw Joe Gatt run powerfully through the defence before finding Llywarch Ap Myrddin, the full back giving the scoring pass to Powell to run it in from the Keys 22, Jones added the extras. Tovey, though, landed a penalty to bring it back to a one point game,

The next twenty minutes saw both sides make a lot of mistakes and not get anything going. Eventually, with ten minutes remaining, Cardiff did get the scoreboard moving again. Another line-out near the visitor’s line and this time the same result as in the first half but with a different scorer. Rory Pitman the man to go over. Gareth Thompson added the extras and that seemed to be enough. But Jason Tovey kicked a penalty to bring the Keys within a score and the visitors piled on the pressure as the clock ran down. A series of penalties saw Keys move the ball downfield and with time up replacement Todd James crashed over in the corner to bring Keys within a point. Up stepped Tovey to secure the win, but the kick shaved the posts and the home crowd breathed a sigh of relief as Cardiff won 36-35.