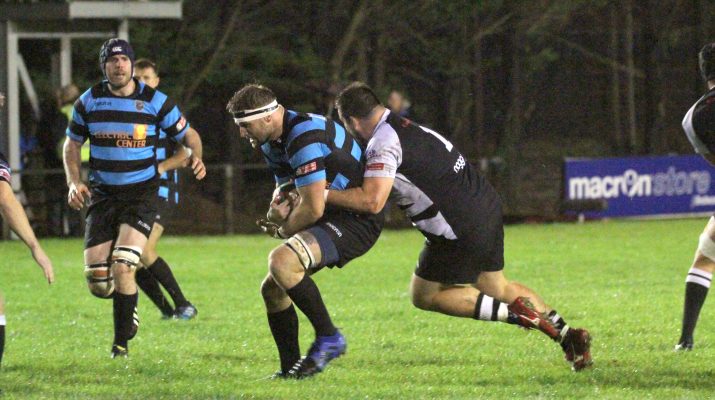 Cardiff made it three in a row as the defeated Bedwas and the elements at the Bridge Field.

With a live TV audience watching the Blue & Blacks made a sloppy start to the game. Within three minutes the visitors were a Joe Scrivens penalty down and two minutes later went further behind. A quick tap penalty by Tom Rowlands was shipped to Adam Williams who crashed over in the corner, Scrivens added the difficult conversion and a long night looked in prospect.

But the Blue & Blacks regathered their thoughts and started to put pressure on Bedwas particularly through the scrum which was Cardiff’s biggest weapon. It took though a further twenty minutes for the visitors to register their first points. The scrum was the provider of the penalty, Steffan Jones converting that to three points. And the former Bedwas player reduced the deficit just before half time with his second.

The second half very much belonged to Cardiff and that scrum. The issue was turning that dominance into points. The Blue & Blacks got early reward in the shape of a penalty try awarded when captain Joey Tomlinson was brave enough to use it five metres out rather than take three points. As Bedwas kicked the ball from the scrum that was charging towards the home line the referee had no option but to head under the sticks.

The game then descended into a very scrappy affair as both sides had difficulty with the deteriorating conditions. Cardiff extended the lead with ten minutes to go when Jones added a short range kick after yet another scrum was pulled down as it went forward. And the Blue & Black then had five minutes of pressure that should have made the game safe, but as with the last few games the Blue & Blacks gave the coaching staff and the supporters a few heart stopping moments. Bedwas turned the ball over and headed straight down field. That attack earned a penalty that they looked to steer into the corner. But that was sliced and the ball went dead give the Blue & Blacks a drop out. But when that was returned to near the line and another penalty awarded no mistake was made with the kick. Five metres out you would have banked on the catch and drive, but James Murphy had other ideas as he picked off the line out and earned the Blue & Blacks a penalty that was punted into row Z to take away the points.