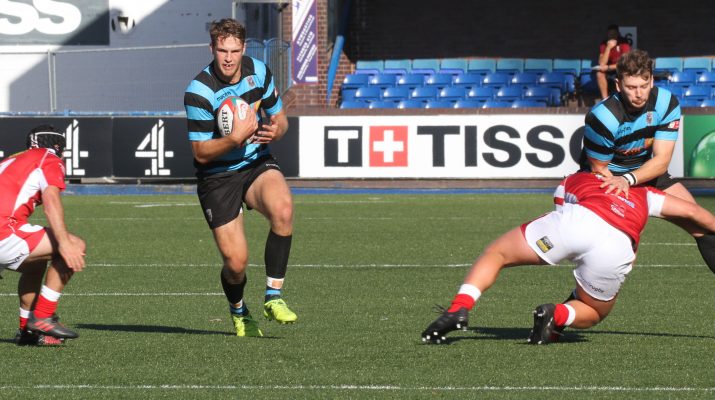 Cardiff and Llanelli served up an entertaining game for the crowd at the Arms Park but the defensive e coaching staff would have been pulling their hair out.

Twelve tries were scored as both sides secured a bonus point for four tries. Llanelli burst into the lead and within two minutes they had their first try. Oliver Reyland picking up a loose ball to score. Ashley Sutton added the extras and double the Llanelli lead with a try of his own two minutes later. The Blue & Blacks hit back as their pack started to take control, Steffan Jones delivering an inside ball for Ben Thomas to score. Jones converted, but Llanelli extended the lead through two Sutton penalties.

Cardiff were though coming more into the game and when the pack delivered another penalty the choice was to send the ball into the corner. From the driving lineout Kirby Myhill crashed over. Jones added the extras. And the scrum was to deliver the next score as a five-meter effort was stopped illegally, the Blue & Blacks awarded their third penalty try in as many weeks to send them into half time one point up.

The second half continued in the same vein as both sides looked to play running rugby in the sunshine. Morgan Allen scored the bonus point try, again provided from a lineout after a scrum penalty. And the fifth try followed three minutes later. This time Thomas turned provider as he gave a beautiful inside pass for Ioan Davies to cut through and score his first try for the club. And the game seemed to have been made safe as another of the backrow got on the score sheet, Luke Crocker going over after another powerful maul was stopped short.

From there though the home defence seemed to go to sleep. Llanelli were allowed back into the game, two tries from deep gave the visitors hope, Chris Gorvett and Josh Weeds scoring before another penalty try, this time to Llanelli set pulses racing. But the Blue and Blacks made the game safe as Will Rees-Hole latched onto a mistake in the Llanelli twenty-two. And Gareth Thompson, who had earlier passed 500 career points for the Blue & Blacks took away a losing bonus point with a penalty with the last kick of the game.