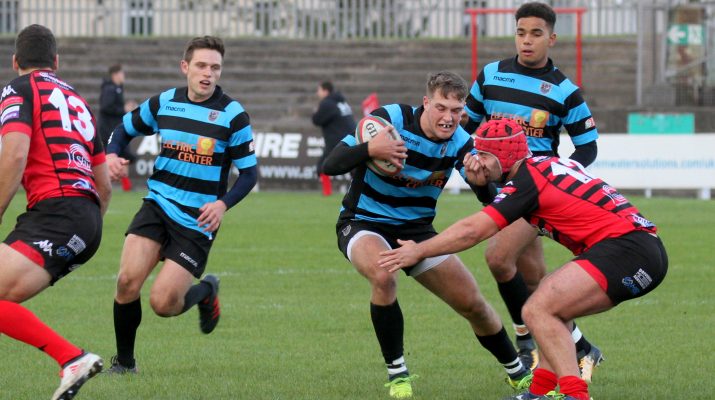 Cardiff produced a five star, five try performance at the Talbot Athletic Ground as they climbed to fifth in the table. The only downside to the game was what looked like a serious facial injury to Callum Bradbury in the second half.

The Blue & Blacks were first on the scoreboard. Early pressure led to a lineout inside the Wizards half and when Gareth Thompson got the ball his pass inside allowed Ben Thomas to score. Aberavon responded in kind two minutes later with a fast attack that allowed Johnny Phillips to dot down and level the scores.

Thompson shoved Cardiff back in front with a penalty after a Wizard was caught offside, and when a break by Matthew Powell was stopped, Max Llewellyn and Ioan Davies combined to put Thomas over again and extend the lead. Thompson increased that further with a penalty before the home side scored what were to be their last points of the game. A fly hack chase saw Cardiff under pressure near their own line, and from the resulting ruck James Garland scrambled over and converted to leave the half time score 18-12 in the Blue & Black’s favour.

The second half belonged very much to Cardiff. The scrum was now being the dominant force it had been in the last four games and that was giving Cardiff field position. The third try came when Aberavon were put under pressure in their own half. Trying to run the ball they made one pass too many and the alert Powell was able to intercept the last pass and sprint in untouched.

The bonus point try came a few minutes later, and it was a gem that would have lit up any match. The scrum was responsible for a penalty that was kicked into the Wizards twenty-two. Quick ball from the lineout was spun wide, Ben Thomas picked Steffan Jones on the run and his beautifully timed pass put Davies in a gap. With three still to beat the young fullback shot between two and rounded the third to score. Jones converted.

Aberavon were now on the back foot and trying to get back into the game, but the Cardiff defence had other ideas. Every attack was being repelled and even after a series of penalties from referee Gwyn Morris the Wizards came away from the Cardiff half empty handed. When the Blue & Blacks eventually worked their way back into the Aberavon twenty-two they came away with their fifth try.
A lineout drive was illegally stopped but with a free play available the ball was moved into mid-field where Morgan Allen was waiting. The back row needed no second invitation to head for the line, and with a little help from a couple of his forward friends he crashed over under the posts. Jones added the extras and Cardiff leapt over the Wizards in the table and recorded their fifth win on the run.