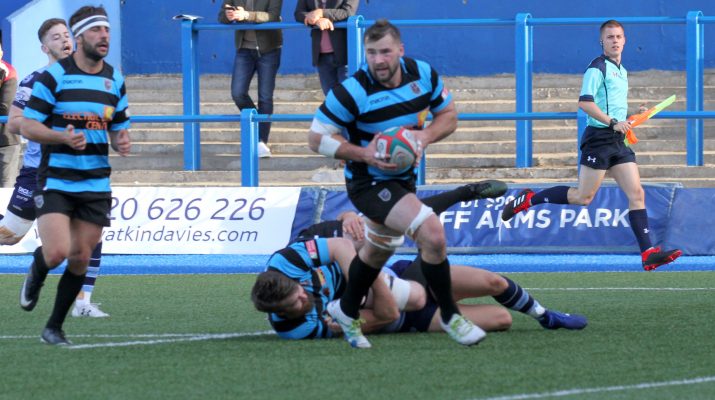 Everyone at Cardiff RFC would like to congratulate Rory on gaining a short-term professional contract with the English Championship team Doncaster Knights. Rory has been at the heart of everything that the Blue & Blacks have achieved and although he will be sorely missed we wish him every success and remind him there will always be a warm welcome from him at the Arms Park.

The Knights have signed an outstanding back-rower who in his nine games this season in Blue & Black has been on the winning side 6 times.

The coaching staff, squad and everyone at Cardiff RFC would like to thank him for all his support and hard work and wish him the very best of luck in his new job.

As one door closes another opens and Cardiff RFC are delighted to have secured the services of TRT to work with the Blue & Blacks forwards. TRT has a wealth of experience having gained 28 Wales caps, as well as distinguished careers with the Cardiff Blues, the Dragons and London Wasps. TRT is currently working with the Cardiff Blues Academy and is keen to cut his teeth in the Premiership. Head Coach Steve Law said of TRT “I worked with him during the recent A games and was very impressed with what I saw. The experience that he can pass on to the squad will be invaluable and I look forward to working with him some more over the rest of the season”

Cardiff RFC are delighted that Miles Normandale has been called into the Cardiff Blues squad to play against Uruguay on Tuesday. Miles came back to the RFC after a long career playing professionally with the Blues and Rotherham. Having recovered an injury sustained last season Miles has been outstanding both on and off the pitch this season. That hasn’t gone un-noticed, Steve Law commenting that “Miles has been in great form and it is a great opportunity for him. At Cardiff RFC we always support the Cardiff Blues and this season the relationship between ourselves and the senior side has been better than ever. By working together, we can make both sides stronger and long may that great relationship continue”.

Cardiff would like to congratulate our players who will represent Crawshays on Friday night at the Gnoll (7:30) against Hong Kong. James Murphy, Morgan Allen, Kieran Martin and Ross Pritchard will take their places in a squad that will be coached by former Blue & Black favourite Mike Rayer.