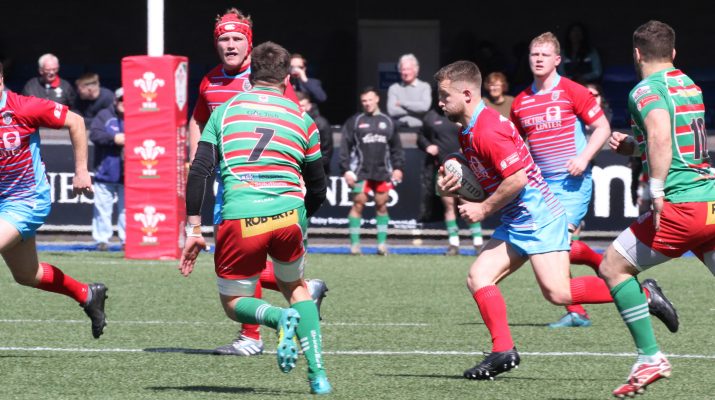 Eleven tries were scored as Ebbw Vale were run off the pitch. But the away side were first on the board, a penalty from Rhys Jones giving them an early lead. Cardiff though were moving the ball around the pitch and were soon on the board themselves. Aled Cockwell, who would later be named Man Of The Match, was put over by a lovely inside pass from Gareth Thompson, the outside half converting. Thompson was also involved in the next two tries. The first was scored when Cardiff’s lineout had secured off the top ball, when this was moved wide Dan Fish created the extra man and when Powell cut a line back inside the defence was wrong footed and the winger powered over.

Fish himself was to grab a brace inside four minutes. The first came from a break by Joe Gatt, Fish on the end of a sympathetic pass. His second was quick thinking as Ebbw Vale were penalised they were slow to get back he took a quick tap from 30 metres out and sprinted over untouched.  Tom Daley grabbed the fifth try as Ebbw Vale started to wilt in the Arms Park sunshine. Cardiff were throwing wave after wave of attackers at the Steelemen and eventually there was a gap that Daley exploited. Fish then turned provider for the final score of the half as a break down the left hand side and some quick interplay allowed Fish to send Edd Howley, who was celebrating gaining his Club Cap, over. Thompson converted all six tries as the Blue & Blacks headed down the tunnel 42-3 up at half time.

Ebbw tried to get things going in the second half and were first to score. Stefan Thomas crossing in the corner, Jones converting. But Cardiff were in no mood to let up. Joe Gatt was next on the scoresheet as again the ball went through several hands before the centre crossed. The Steelmen got one back with a try from Rhys Jones after a Cardiff mistake, but Mathew Powell cancelled that out as he crossed for try number eight. As Cardiff rang the changes Morgan Griffiths, who had just come off the bench, managed to get to a chip through first to score number nine. The Cardiff scrum was now making a mess of the visitors scrum every time the set piece was called, and from a penalty a catch and drive was stopped. The ball was sent from side to side and as Ebbw ran out of defenders Cockwell added his second as he powered over from short range.

The final score came just before the referee blew for no side. Steffan Jones sending Fish though a hole, the fullback linking up with Macauley Cook who scored try number eleven and a 75-17 final score.