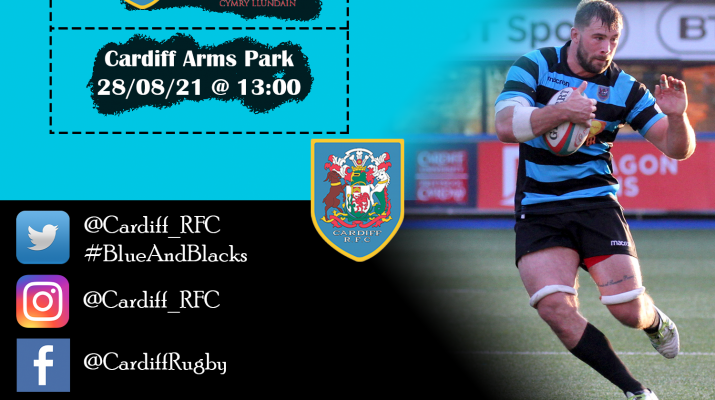 Cardiff lock horns with London Welsh on Saturday (28th Aug) for the first time since 1996, a game that was played at Old Deer Park on the morning of the England – Wales encounter. The Blue & Blacks ran in 10 tries on that morning, winning 64-15.

Cardiff verses London Welsh had always been a traditional game pre the internationals and our two clubs have played 111 times before. The first game was played in 1885 and the records see Cardiff having won 94 of the encounters so far, racking up 2209 point in the process.

This season sees the return of what was always one of the highlights of the season here on a Friday evening before the ‘big game’ and the friendly allows the coaching staff to have a look at the squad before the Premiership cup begins in September.

As always in a pre-season friendly the teams will see several changes during the game and the Blue & Blacks will use the two halves to look at the squad. There will be a lot of new faces on show with Morgan Allen captaining the first half side.  Jack Maynard starts at outside half following his move from the Drovers, the rest of the backline are new to Blue & Black colours as is most of the pack. In that pack Sean Moore makes his long-awaited debut in the second row. The front row shows three new faces including Llyr Green and Alun Rees, both part of the new Blue & Black squad. The Cardiff rugby academy makes up the rest of the team and these exciting young players will be very much part of the squad during this season.

The second half team contains six of the players retained from last season and a couple of positional changes from the first half team. Rory Bartle starts, following a break from injury, after joining from Jersey Reds and will captain the second half side. Cardiff RFC are thankful to Bedwas for the permits for Dale Rodgers and Rory Harris.