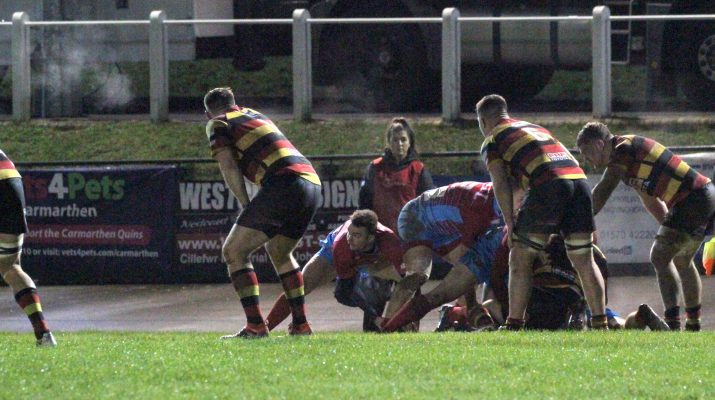 Cardiff lost their second game of the season as they put in a disappointing display against Carmarthen Quins.

The top two went head to head live on Scrum XV but ended up on the receiving end of how to play with a man down by a home side that were reduced to fourteen early in the first half, Jack Wilson shown a straight red for high tackle on James Beal. That seemed to inspire Quins and shortly after they scored the game’s first try. A sustained period in the Blue & Black half lead to a try by Javan Sebastian that was converted by Josh Bascup,

Cardiff hit straight back. A lineout in the Quins half was sent straight into midfield where Teri Gee burst though the middle and sent Barnie Nightingale over for a try Gareth Thompson converted. The visitors were getting plenty of ball, but mistakes and penalties stopped any flow to the game. From one penalty the Quins extended their lead. Opting for the corner they moved the ball into midfield ans sent Bascup over for a converted try and a seven point half time advantage.

The second half saw the fourteen Quins dominate Cardiff. As much as the Blue & Blacks tried to get things going the Quins snuffed it out. A scrum near the Cardiff line saw the Quins score try three when Johnathon Evans went over. Their bonus point try came when  Lawrence Reynolds crashed over. And when Morgan Allen was sent off late in the game a bad night at the office had got even worse.

Bascup added a penalty at the end to give the Quins a 27-7 victory.