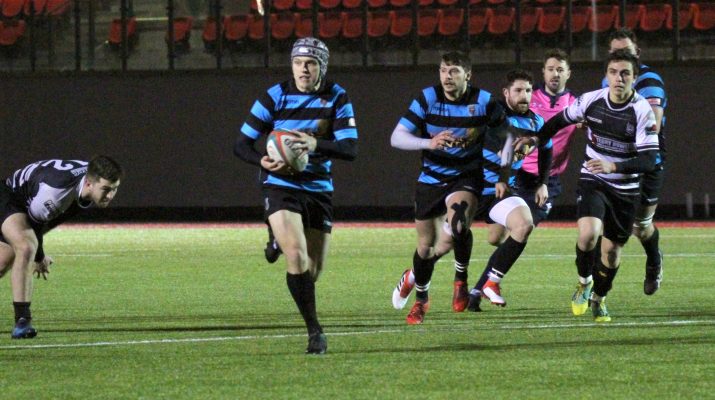 The game was switched from Pandy Park after an inspection deemed the pitch unplayable. The match went ahead in very went and windy conditions, which tested both sides.

Cardiff fell behind to what is thought to be a contender for the fastest try of all time, Steffan Jones slipped while attempting to field a long kick off by Bottica into the corner, which left Keys winger Penny to touch down after 7.2 seconds. Bottica failed with the touch line conversion.

Spurred on by this early success Keys dominated the early part of the game, aided by a strong wind. However, some solid Cardiff defending limited them to Bottica penalties on 6 and 10 minutes, which saw Keys leading 11-0.

Cardiff started to battle back and scored a try in the 31st minute, with what was the best move of the match. Steff Jones cut through the Keys defence from a solid Cardiff scrum. He fed on to Joe Gatt who had joined the line from his wing, who gave a well-timed pass to Ben Thomas to score near the posts. Jones converted.

Cardiff started the 2nd half brightly using the wind effectively and started to gain some control against a very resilient Keys defence, which was hampered by a yellow card to former Cardiff Blues player Damian Welch. Cardiff gained reward for their efforts on 51 mins with an almost carbon copy of their first try, with Jones and Gatt combining in midfield to send Thomas over for his 2nd try, again converted by Jones. Cross keys 11 Cardiff 14

13 mins later following two line-outs, Cardiff ran the ball through the three-quarters, and after a superb pick up off his toes by Steff Jones he fed Thomas who supplied Tom Williams in space with a lovely long pass to score in the corner. Williams went over for a try, converted from the touchline by Steff Jones.

Cardiff continued to try and run the ball with Thomas and Rees-Hole (off the bench) figuring strongly. But for some understandable handling errors, in difficult conditions, Cardiff could well have secured a bonus point. Cross Keys however, secured their own losing bonus point with a try under the posts following some poor Cardiff tackling. Bottica converting.

A very good game under the conditions with Cardiff continuing their impressive run.

A big thanks to our Guest Reporter, Hugh Campbell for this match report. If you would like an opportunity to write a report or conduct an interview, please get in touch.