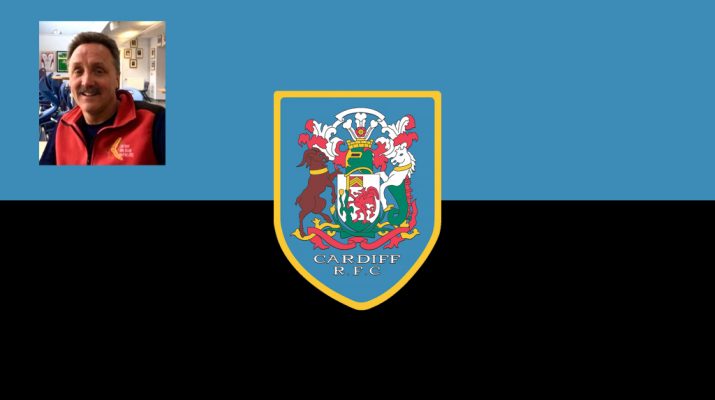 The club is saddened to hear that former player Keri Evans – who played three times for the club in the 1983-4 season – has passed away after a long illness.

Although Keri only made three appearances for the Blue and Blacks he had a massive impact on the club and Cardiff Schools Rugby. The following has been written by Cardiff RFC Team manager, Iestyn Williams –

It’s with a heavy heart I write this tribute for former Cardiff RFC 1983-84 player Keri Evans, my teacher and ffrind.

Keri taught at Ysgol Glantaf since the 1980’s, an inspirational teacher and mentor for many pupils. He was approachable and a caring teacher who has given so many opportunities to pupils under his care over the years.

From Glantaf the likes of ex Cardiff RFC players such as the Robinson brothers, Rhys Patchell, Jamie Roberts, Huw Harries, Jason Hewlett…. the list goes on to the present with Ioan Davies, all have been guided and inspired by Keri.

I was lucky enough to have Keri as my teacher at Ysgol Glantaf but also a fellow teacher within the Cardiff Schools Rugby programme. Even as a fellow teacher he was always on hand for a chat and some guidance and he’s certainly been an influential mentor for me over the years.

Keri was a gentleman and a hero to many pupils that have been under his care. I will remember him for the opportunities he gave me as a pupil, the banter and jokes to the one-liners such as “Skill is forever”, “Up here for thinking down there for dancing “ and especially for his “Penalty, dull Play” when refereeing which caught out so many Glantaf pupils for not taking the correct decision on the playing field even if they scored!! In which I have used as a teacher whilst refereeing schoolboy games to present, Keri’s influence!!!

Keri also excelled as a WRU referee and coached Clwb Rygbi Cymry Caerdydd for many years after retiring from refereeing. Highlight being crowned National Bowl Champions in 2014.

“There are many fond memories and stories from many trips and tours over the years that we were fortunate to be taken on by Keri and Pete Manning and I consider myself very privileged to have had the opportunity to play under Keri’s guidance, but more importantly to have the privilege of remaining a close friend of Keri’s after leaving school, regularly sharing an evening at the Curry house sipping red wine seeing his great sense of humour shine through his smile.”

“His love of the game and the “way it should be played and enjoyed” has left its mark on many rugby players, but not only those that were fortunate to play at higher levels, but many many more that remain involved in playing, support and teaching roles across Wales who continue Keri’s legacy and spirit in their day to day activities.  His influence on many cannot be understated, despite Keri being so humble, yet so influential on many.”

“It is with a very heavy heart we say goodbye to one of the great guys and I am still scanning the rule book for the “Penalty for dull play clause”.  Cwsg mewn hedd Keri.

“I first met Mr Evans as an 11year old boy on my first day of high school at Ysgol Glantaf, I knew instantly he was a teacher you could trust and turn to. He was truly amazing he not only taught his pupils in an engaging and caring way, he also taught you great life skills….getting you ready for the big world. Material things were not important to Keri, family and friends, achieving goals, making happy memories, that’s what was important. Little did I realise at 11 years of age that Keri would still be such an important person in my life who has helped guide me through different milestones, always there to turn, right up to my 46th year even helping my children with their homework. He was so selfless he gave much of his time to Ysgol Glantaf in fundraising for rugby tours and worthy causes so that children would leave school with wonderful experiences and memories. His sense of humour lives on in us all, everything was fun when Keri was involved. I feel blessed to have had Keri and his wonderful family in mine and my family’s life. He was a once in a lifetime person”

A legend of a man, a legend of a teacher but most importantly a gentleman who had time for everyone. He will be hugely missed by all.

Our thoughts are with Iola, Keri’s wife and their children Elin and Dafydd.