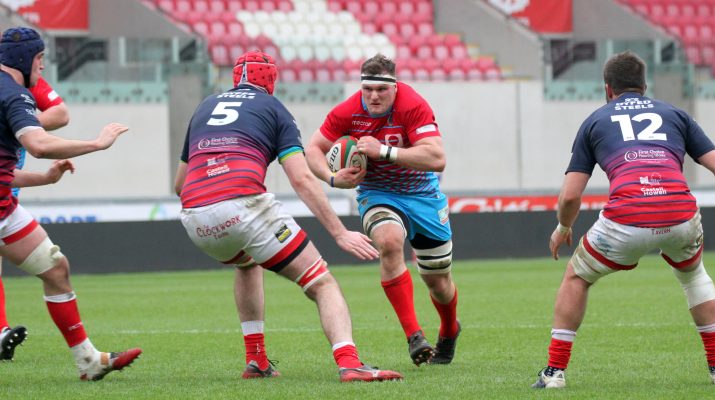 Cardiff made the semi-finals of the Specsavers National Cup with a four try performance at Parc-Y-Scarlets.

The Blue & Blacks had the early pressure and eventually that pressure told as Will Davies-King went over after a series of pick and drives. Gareth Thompson converted. That lead was double a few minutes later when a loose Llanelli pass on the Cardiff ten metre line was picked up by Edd Howley. No one touched the fullback as he raced in. Thompson again added the extras.

Ioan Hughes kicked Llanelli’s first point with a 14th minute penalty before that was cancelled out by Thompson four minutes later. But Llanelli were starting to play and eventually they got a score they deserved as Jonny Lewis chipped over the defence and caught his own kick to score, Hughes converted. A long stoppage towards the end of the half saw Alex Everett treated for an injury. Cardiff extended their lead shortly after. From the restart scrum a series of catch and drives saw Sam Pailor crash over for a converted try. Thompson was again on target with a penalty just before half time.

Llanelli made a bright start to the second half and a try in the corner for Kalum Evans brought them right back into the game. That spurred Cardiff on again and a beautiful loop run by James Beal set up Howley for his second try of the afternoon. Llanelli hit back again as the scoreboard swayed from one side to the other. Nathan Hart dashing over from short range. But Cardiff were still on the hunt for more, only a marginal forward pass denying Howley a hattrick. Joe Scrivens added a late penalty as Cardiff progressed to the next round.