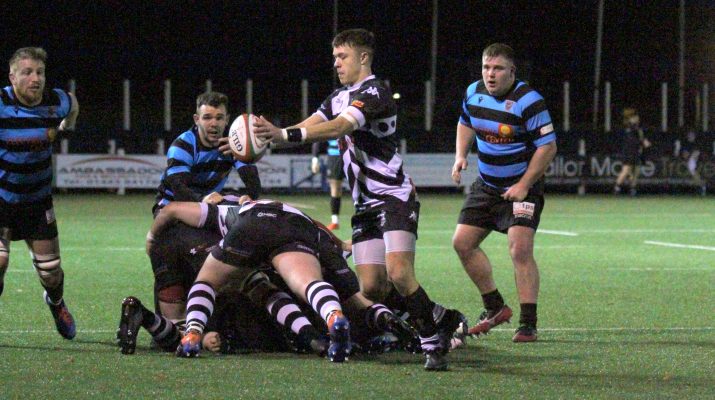 Cardiff’s unbeaten run in the Indigo Premiership came to an end in a titanic tussle at Sardis Road.

Pontypridd had not lost at home to the Blue & Blacks since 2009 and the home side started as if they meant to keep it that way. Straight from the kick off they reclaimed the ball and a few phases later and they were over the Cardiff line for the game’s opening score, Alex Webber was the scorer of a try that Diggy Bird converted. Bird was on target again a few minutes later with a simple penalty. That spurred Cardiff into action, they gained a penalty that was pushed just wide of the posts, but a few minutes later they had another opportunity. This time they went to the corner and from the rolling maul Thomas Davies went over.

Bird extended the Ponty lead with another penalty, although this was cancelled out when Gareth Thompson, playing his 100th game in Blue & Black, landed a short range kick. Cardiff were getting more of the ball and with the clock heading to half time took the lead. Another series of penalties had given them a position near the home line. Several drives went close but eventually Alex Everett was able to cross. That lead didn’t last long as another kick off issue gave Ponty possession. Sion Parry was on hand to cross for the converted try to send Ponty in 20-15 ahead.

Bird further extended the lead early in the second half before the try of the match. Cardiff had the ball in midfield and when Teri Gee came on a great angle Thompson found him with the winger running in from halfway. Thompson converted and put Cardiff in front with another penalty. That lead lasted until nearly the 70th minute, but when Cardiff were reduced to fourteen men Ponty gained another kickable penalty that Bird converted.

The last few minutes were a scramble to protect the lead or score the winning points. Ponty were denied when the TMO ruled that the ball had been held up over the Cardiff line and Cardiff  had a score ruled out when a  forward pass was spotted to deny a second try for Teri Gee. Cardiff though did have one last chance. As they tried to break out of the 22 Teri Gee spotted  a gap and shot through. As the wing broke into the Ponty 22 heading for the line  he was hauled down by Alex Webber. Ponty reclaimed possession and put the ball gleefully into the stands as the referee signalled the end of the game.