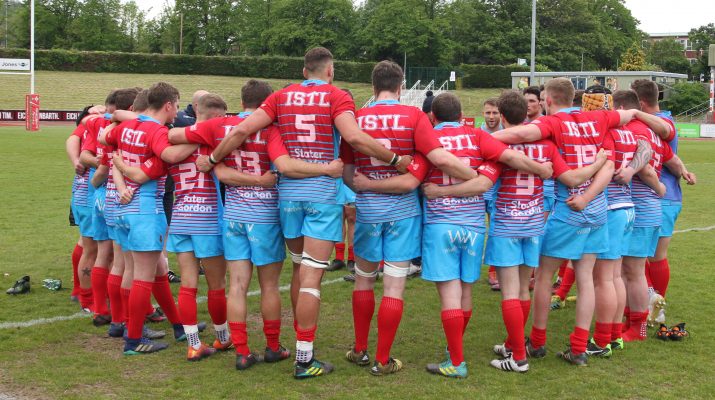 As the travelling fans were still polishing off their pregame Greggs, RGC had scored their first try. Less than 90 seconds on the clock and Billy McBryde broke through the Cardiff defence to set up Jordan Jones for RGCs first try. 2 minutes later and an offload from Evan Yardley saw Andrew Williams cross for RGC’s second try. RGC were on a roll and some excellent offloading gifted Bailey Rae the 3rd try of the game straight from the restart. Less than 7 minutes in, Cardiff were down by 21 points and playing like they had been out until 7am.

The game settled down a bit after those early trys with both teams playing some good rugby. A perfectly timed pass from Gareth Thompson put Llywarch Ap Myrddin through a gap and his offload allowed Chris Lewis (Cardiff Met) to cross for Cardiff’s first try of the game. It did not take long for RGC to respond and a well-executed lineout move almost got RGC their 4th try but the throw was judged to not be straight. A couple of minutes later and Rhys Williams broke through a couple of tackles and scored under the posts. It took a further 10 minutes for the next try and this time it was for Cardiff. A Cardiff scrum 5 metres out from the line and a pass from Martin Roberts allowed Gareth Thompson (sponsored by Cardiff RFC Sunshine Club) to charge through the RGC defence for the final score of the first half.

The second half started better than the first and Cardiff looked to be pressing early on. A break by Owen Jones got Cardiff into the RGC 22 but a dropped pass was pounced on by Billy McBryde who ran 80 metres to score RGC’s 5th of the game. RGC gathered the restart and a chip over the Cardiff defensive line was caught by Rhys Williams who ran the ball to the Cardiff 22 before offloading to Evan Yardley to score under the posts. Like a fluted flange, it looked like the second half was going to be identical to the first half. Cardiff stuck with what they have done best for large parts of the season and a lineout, 5 metres from the RGC try line, was turned into a driving maul with Zac Hewlett (Cross Keys) scoring for Cardiff.

With just 15 minutes of the second half gone, the RGC pack put huge pressure on an attacking scrum inside the Cardiff 22. With penalty advantage being played, Jordan Jones broke from the back of the scrum to set up a try for Efan Jones under the posts. A bad restart from Cardiff gave RGC a penalty that was kicked in to the Cardiff 22. Some well worked moves from the resulting lineout allowed Sam Jones to score RGC’s 8th of the game. With 20 minutes remaining, the game settled down and with just 10 minutes to go Cardiff got another penalty in a dangerous area. They kicked to touch and got another driving maul going. This time Zach O’Driscoll (sponsored by aurora360.cloud) scored for his 1st try of the season and Cardiff’s 4th of the game. The final points of the game came from a Cardiff kick that was caught by Nick Butterworth for RGC. He ran through almost untouched to score RGC’s 9th. Billy McBryde converted (making it 9 from 9 for him) to take the score to 63-24.

Cardiff got the bonus point they wanted to move clear of Pontypridd and managed to outscore the UK’s entry to Eurovision. We end the season in second place in the league, as National Cup winners, with club captain Joey Tomlinson nominated for Player of the Year, and with Ben Thomas nominated for Newcomer of the Year. We hope to see you all at the Caps Presentation and Hall of Fame Dinner on the 14th June and would like to thank you all for your support this season.