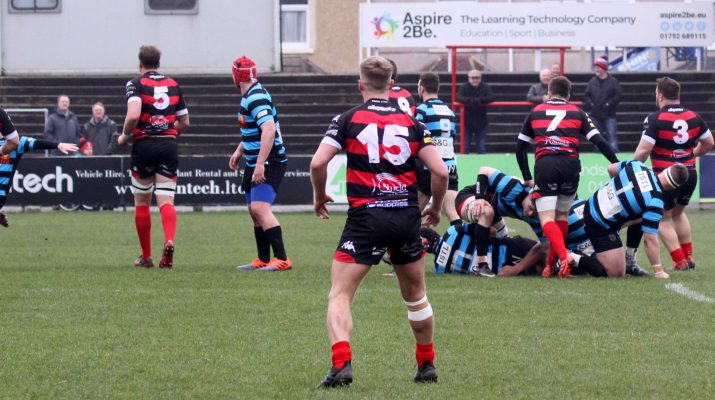 Cardiff came away from the Talbot Athletic Ground with just a losing bonus to show for their efforts.

Aberavon were looking to reverse the defeat at the Arms Park late last year but it was the Blue & Blacks that started the better. Having won a series of penalties the visitors worked their way into the Wizards twenty-two and when the lineout drive was stopped the ball was spread into the back and Teri Gee ran a perfect line onto Gareth Thompson’s pass to score, Thompson added the extras.

The outside half was on target again a few minutes later as he slotted a simple penalty to extend the lead. Aberavon fought back and when they broke through the Cardiff defence, Chay Smith was on hand to finish the move. Aled Thomas added the extras and levelled the scores shortly before half time with a penalty.

The opening of the second half saw Cardiff in control again. The lead was again back in their hands when Thompson kicked a penalty, but the Wizards hit the front for the first time, following a yellow card for Filo Paulo, when Geraint James scored near the posts and Thomas added the extras. They went further ahead when Thomas kicked his second penalty of the game. Cardiff’s defence was keeping them in the game and when they were reduced to fourteen permanently, they had to work especially hard. That they did and they worked their way down into the home side’s half for one last onslaught.

The forwards had the first go, but when that didn’t work the ball was moved wide creating space for Teri Gee to score his second wide out. The conversion slipped agonisingly wide and the Blue & Blacks were left two points adrift as the referee blew for no side.