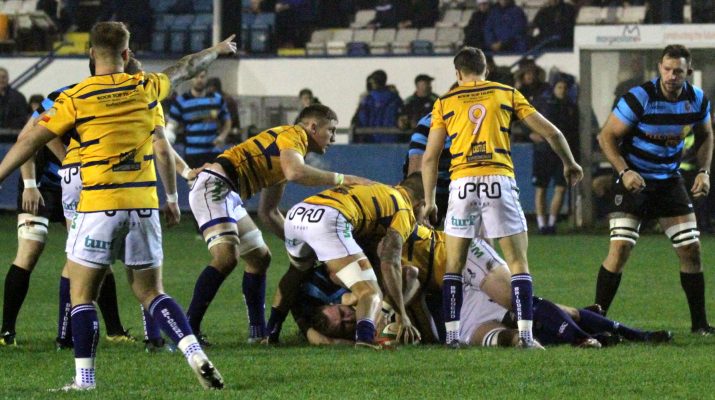 Cardiff beat Bridgend at the Brewery Field in a game the Blue & Blacks controlled right from the start.

The Ravens came out of the blocks firing, but they were unable to make an impression on the Cardiff defence, and it was that defence that laid the platform for the victory. Every time Bridgend had the ball anything they tried to create was snuffed out, in fact, in the first half the Ravens were restricted to just a couple of visits to the Cardiff twenty-two.

That said Cardiff had a lot of possession in the first half and couldn’t make it count near the try line. The first points of the game came in the 23rd minute when Gareth Thompson landed the first of his penalties. Bridgend were being put under severe pressure on their line but a yellow card forced the Blue & Blacks to play for ten minutes with 14 men. This they did comfortably without conceding before Thompson extended the lead with two further goals.

The period just before half time was a scrappy one with neither side getting anything going, but the end of the half was lit up for the Blue & Blacks when debutant Ed Howley landed a monster penalty from inside his own half to send the visitors in12-0 ahead.

The Blue and Blacks started the second half with much more purpose and when the Ravens were reduced to fourteen men they took advantage. A lineout throw in the Bridgend twenty-two went over the entire lineout, but Will Rees-Hole was first to react. The centre raced onto the ball and as it bounced off his knee he was able to gather it and score under the posts, Thompson added the extra.

Bridgend now looked a beaten side and it was no surprise when a second try came. This time the whole team was involved. Several drives from the forwards set up a position in the home twenty-two before the ball was sent along the back line. As that move was halted a snipe down the blind side and lovely hands by Rees-Hole and Matthew Powell sent Tom Daley over in the corner. Steffan Jones added the touchline conversion.

The third try came from the pressure the defence was putting on a tiring Ravens team. Having turned the ball over a few passes into midfield created a gap for Morgan Allen to run into. The big No8 needed no second invitation. He had been a real threat all game and as he burst through no one was going to stop him as he powered over the line. Again Jones added the extras and Cardiff went in search of the bonus point try. Unfortunately time ran out before they were able to get the fourth try but a well-earned 36-0 victory moved the team up to third place in the table.