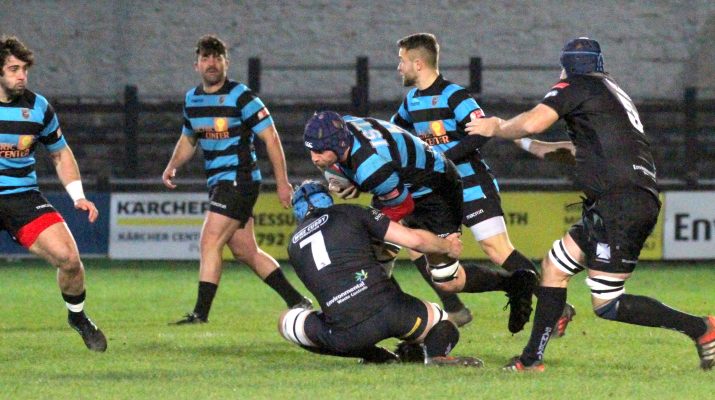 Cardiff scored nine tries in their 400th Premiership game at the Gnoll on Friday night securing a bonus point and a straight eighth win in the league.

The first half the Blue & Blacks were scoring at more that a point a minute. In fact in the first fifteen minutes the visitors had secured the bonus point without reply. The first try came in the third minute. Having put pressure on the Welsh All Blacks they won a lineout in the home half. Several phases later a try looked likely in the corner, but when that was stopped the ball was worked back infield and Joe Gatt was able to cross near the posts, Gareth Thompson converted.

A few minutes later and that score was doubled. A series of penalties gave Cardiff a lineout near the Neath line and when the maul was stopped Joey Tomlinson broke off and fed Will Rees-Hole who scored. The third try came from a turnover in the Cardiff half. Rees-Hole was involved again as he picked up the ball at the back of a ruck he was able to set off downfield. When he found Martin Roberts the scrum half spotted Max Llewellyn in space and the centre romped over unopposed. The fourth try came from a planned move. From a lineout on halfway Gatt was brought back on the inside and through a hole. He drew the last man and put Thompson over.

The fifth and sixth tries came from Neath mistakes. The fifth was scored when a wide pass went to the no one in particular. Martin Roberts was first to react scoring without a finger being laid on him. The sixth happened when Neath were trying to work the ball into midfield but when it dropped to the floor it was expertly scooped up by Morgan Allen who romped over from 35 metres out. Thompson was on target will all the conversions. In between Neath manged to get a try through James Roberts but the Blue & Blacks went in 42-7 up at half time.

If Cardiff thought the second half would be as easy Neath made them sit up and think. Two quick tries brought the home team back into the game. Ben Uphill went over from short range before Ian Ellie scored their third. Cardiff were just not getting it together, but eventually it started to click again as they sealed victory with three further tries.

Tom Daley scored the first of them after the rest of the forwards had worked a position in the centre of the field. The powerful blindside broke the first tackle and sprinted over from 30 metres out. The second saw Gatt get his second. There were gaps appearing all around the Gnoll and two quick passes sent the winger through the gap before diving over to score, Thompson converted.

The final try came for a former Neath favourite.  Cardiff appeared to have lost the ball, but when it shot out of a ruck two quick passes allowed Ben Thomas to put Adam Jones into space. He drew the tacklers and his pop-pass to Ed Howley sent the fullback over for his first try in Blue & Black and Cardiff home with a 59-17 victory.