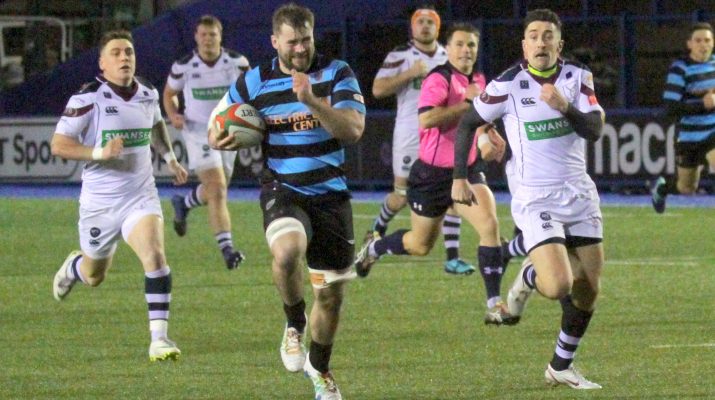 Cardiff beat Swansea at a wet Arms Park to go second in the Premiership table.

With a little light rain falling both sides took to the field in front of the television cameras, and it was Swansea who had the better start. The All Whites put pressure on the home defence right from the kick off. Cardiff were forced to put bodies on the line but as with previous weeks they were up to the task. Slowly the Blue & Blacks started to get some dominance at the set piece. And the scrum was the main weapon, winning penalties to relieve pressure.

Eventually the home side turned pressure into points, but it took until the end of the first quarter for the Blue & Blacks to register the first score. A five-metre lineout seemed to have gone over the top but the ball found its way to Morgan Allen at the back and he muscled his way over. The referee used the television to check a knock on but awarded the try that Gareth Thompson converted.

And the Blue & Blacks doubled that lead a few minutes later. Swansea kicked a defensive clearance to Dan Fish. The fullback looked up saw space on the wing and used his pace to get into the twenty-two. There he exchanged passes with Will Rees-Hole before sprinting under the stick for another converted try. Swansea were still playing attacking rugby and they should have scored two minutes later. The All Whites had space on the outside following a Cardiff mistake but the final pass went astray and Cardiff went in at half time 14-0 ahead

The second half was spoilt by the rain that lashed down onto the Arms Park. Thompson extended the Cardiff lead with a penalty early in the half but the ball was being slowed down and attacking rugby was at a minimum. Cardiff were still defending superbly, and a try nearly resulted from it. Swansea were building an attack when Man Of The Match Allen got his hands on the ball in his own half. The big No 8 charged off towards the Swansea line and it took a desperate tackle three metres out to stop him. No points resulted from that attack, but the Blue & Blacks stayed in the twenty-two and the third try was registered a few minutes later. A few pick and goes let the All Whites defensively frail and Lewis Jones was able to exploit it and dash over.

That left Cardiff to hunt the bonus point try, but the only try that was scored in the last few minutes was by the visitors. That consolation try went unconverted but the Blue & Blacks had nine wins in a row and second in the table at least until Saturday.