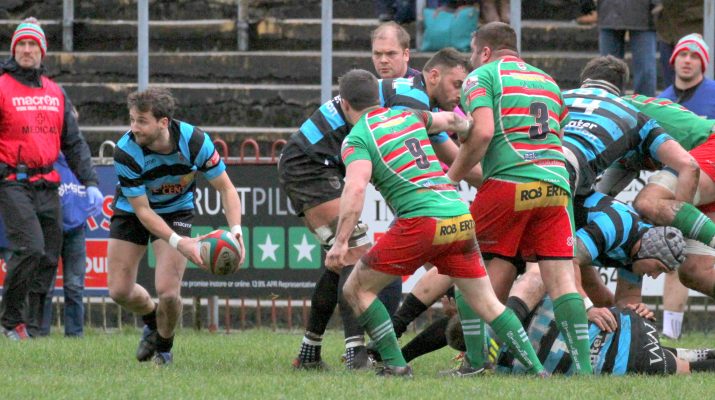 In the wind and rain of Eugene Cross Park Cardiff’s nine match unbeaten run came to an end at the hands of a determined Ebbw Vale side. This was a game that Cardiff shouldn’t have lost, but never did quite enough to deserve to win as crucial mistakes brought the inevitable consequences.

Ebbw Vale started strongly and in the first 20 minutes prevented the visitors from escaping their own half. The only surprise was that as the first quarter of the game approached an end the scoreboard was still reading 0-0. The Blue & Blacks defended resolutely until a poor line-out and a missed tackle allowed Lewis Young to plough over near the posts, Rhys Jones adding the simple conversion making it 7-0. Cardiff started to impose themselves and just a few minutes after the Ebbw Vale try Cardiff pulled back three points through the boot of Gareth Thompson. As Cardiff increased the tempo they should have been rewarded with a try. Peter Lloyd appeared to have scored but without a television replay to refer to the referee went back for a penalty infringement in the lead up to the ‘score’. After yet another penalty infringement near the home line (and one of the Ebbw Vale players receiving a yellow card) Cardiff kicked for the corner. Sadly, the kick was misjudged and went dead resulting in a drop out on the 22m line.

When the referee blew for half-time the deficit was only 4 points and an optimism from the visiting faithful that things would be turned around after the break. The second half started in torrential rain but Cardiff came out determined to get points and within a minute of the restart Cardiff had their first try of the afternoon. A line-out just outside the Ebbw Vale 22 was won and Thomas Davies was able to burst through some poor defending to dive over, Thompson adding the conversion. Cardiff were dominating second half possession and an excellent three-quarter move saw Matthew Powell on the overlap. His pass back inside to Edd Howley beat the last defender for the fullback to score. Once again Gareth Thompson added the conversion and was on target with a penalty shortly after to extend the Cardiff lead to 20-7.

The next score would be crucial with the wind and rain making expansive play difficult. As the home side sought a way back into the game they resorted to the tried and trusted. Two line-outs near the Cardiff line and the Steelman achieved what they normally do in that situation. Even without injured skipper Ronnie Kynes (normally the beneficiary of this tactic) Ebbw Vale had players to succeed as first Ashley Sweet and then Lloyd Evans ploughed over the line for tries. Rhys Jones was successful with one of the kicks from wide out. With the game entering the final stages there was all to play for and with just a couple of minutes left Ebbw got into the perfect position for Rhys Jones to slot a successful drop goal. Cardiff were unable to gain good field position in in the last few minutes and as the referee blew for time it was the home players and supporters that were joyfully celebrating the win.