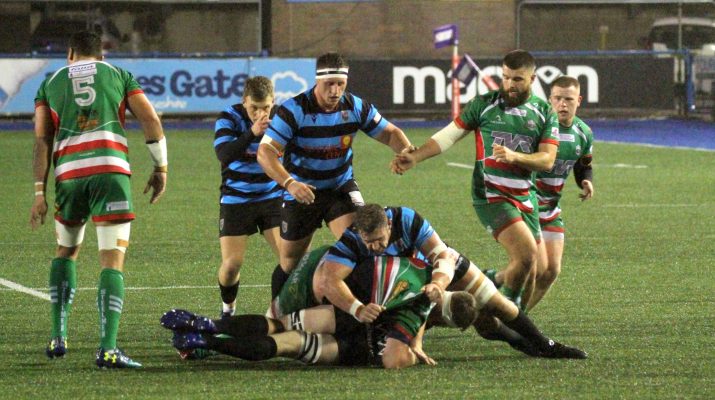 Cardiff maintained their 100% record in the Indigo Premiership with a hard fought win over Ebbw Vale at the Arms Park.

The weather conditions meant it was never going to be a Barbarian style game and both teams struggled with the elements in the opening exchanges.  The Blue & Blacks though made the better start. After a game of kick–tennis they gained a penalty that was kicked to the corner. From the lineout the maul was collapsed, and when Cardiff played the advantage a chip though was gathered by Dan Fish to score. That proved to be the only score of what was to be a poor quality half from both sides. Dan Haymond was off target with a simple penalty midway through the half, but the game was mainly played with the ball between the two twenty-twos. When Ebbw did have the ball it was normally as a result of a Cardiff mistake, the Blue & Black defence though shut any opportunity down to go in one score ahead.

The second half started well, especially for the visitors. They gained a foothold in the Cardiff half, but once again the home side’s defence was the winner. The Steelmen did get on the scoreboard with a Haymond penalty ten minutes in, but after that the game again turned into a kicking dual. Cardiff seemed to win that and when they had another opportunity to go to the corner they took it rather than taking three points. The first lineout didn’t bring a scoreboard reward, but did result in a red card for the visitors. The second lineout though was more successful with the backs joining in as they had the previous week in North Wales. It was a forward that scored with Ethan Lewis again the try scorer, Gareth Thompson added the extras.

Ebbw did try everything to get back into the game but it wasn’t to be and they left empty handed from the Arms Park. They will have a second opportunity though in the National Cup next Friday.