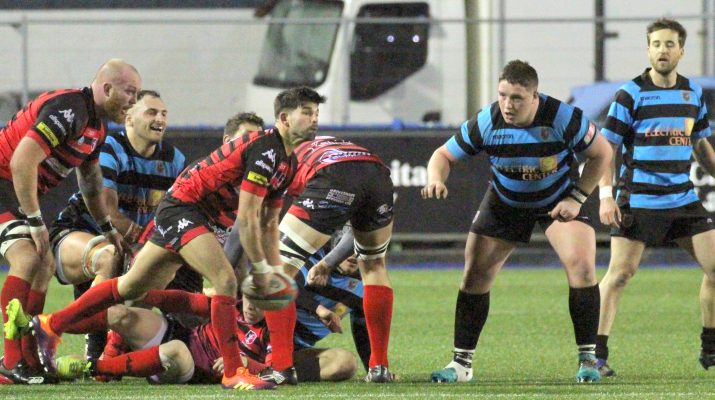 Cardiff kept the pressure on the leaders at the top of the table with a hard fought win at the Arms Park over Aberavon.

Both sides looked to play in the opening minutes of the game but a strong wind was in the faces of the Blue & Blacks. But it was the Wizards that struck first, No8 Luke Joseph going over. Cardiff’s No8 replied shortly afterward. As the ball was worked from side to side the overlap eventually opened up and Morgan Allen went over in the corner. Gareth Thompson expertly converted to put the home side ahead. He added a penalty shortly before half time but that was sandwiched around Cardiff’s second try.

A top of the lineout ball was worked into midfield and from the ruck Will Rees-Hole ran a perfect line and was picked out by Martin Roberts. The centre going over under the sticks.

The second half was a much scrappier affair. Thompson increased the advantage with another penalty, this time with the wind., but Aberavon replied with a try through Will Price. Cardiff has several opportunities to score but the last pass didn’t make it to hand. Two penalties from Thompson though put them two scores clear, and they needed that advantage. From an attacking lineout in the Wizards half Rowan Jenkins picked off a Cardiff pass and shot over the line without anyone getting near him. And when Frankie Jones scored with seven minutes left the game was in the balance. Luckily for Cardiff Aberavon’s kickers left their boots at home as four conversions went astray. The last few minutes the Blue & Blacks contained Aberavon in their own twenty-two and when they realised they were in danger of losing their bonus point they sent the ball off the park.

Cardiff now sit just two points behind leaders Merthyr but next up for Cardiff is the Cup and the visit of Bedwas.