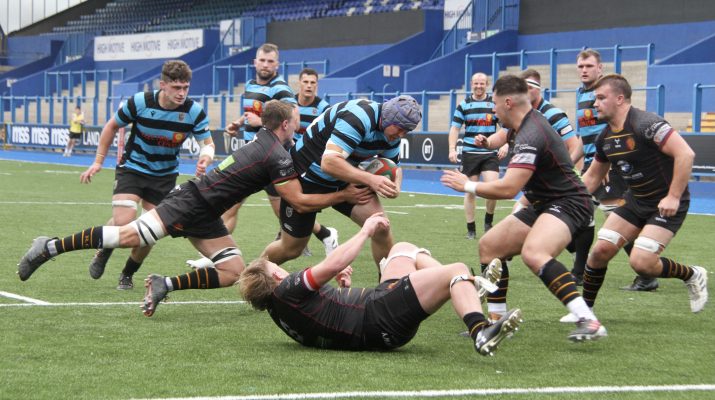 Cardiff secured a bonus win against RGC at the Arms Park as they ran in eight tries.

The first half was a stop – start affair as both sides tried hard to gain an advantage. The Blue & Blacks maybe tried too hard as they looked to move the ball wide. On several occasions this opened up the RGC defence but the last pass didn’t come. The first try did eventually arrive and was a team try. The forwards secured turn over ball and when it was moved wide Jacob Beetham and Dan Fish combined to put Harri Millard over in the corner, Jack Maynard was wide with the conversion.

RGC came roaring back and scored a try of their own to level the scores. Rhys Tudor scampered down the touch line to cross in the corner. The conversion was again wide. Play was tight, but just before half time a penalty from Maynard extended the Blue & Black lead.

Whatever was said at half time worked. Within two minutes Cardiff were further ahead. Fish and Beetham were again involved this time Ryan Wilkins was the beneficiary. Cardiff were starting to dominate and when a penalty was shunted into the corner, Efan Daniel was at the back to crash over. Another sweeping moved sent Wilkins in for his second score before Ellis Bevan took over. His first try was from a lineout. That was stopped but the scrum half spotted a gap in the defence to sneak over. Dan Fish scored following a complete mix up in the RGC defence. The Blue & Blacks had come really close as Tom Hoppe went for the line. He was brought down by RGC, but in competing for the ball on the ground only managed to pop it up for Fish.

Bevan’s second try was a thing of beauty. Fish cut the line on halfway and linked with Hoppe. He went for the line but when he realised he wouldn’t make it his inside pass found the scrum half in support. His hattrick score was based on his pace. He outsmarted his opposite number to sprint over from 25 metres. Maynard converted to cap his man of the match performance.