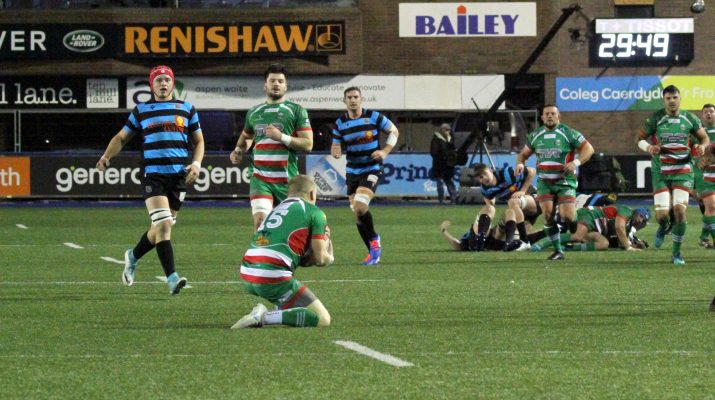 Cardiff cruised into the last eight of the Specsavers National Cup with an eleven try demolition of Ebbw Vale.

The previous week the rain had spoilt the league game, but this week the rain stayed away and the Blue & Blacks ran riot. Cardiff were made to defend in the early minutes as Ebbw hoisted a few up and unders that Cardiff had trouble with. They dealt with them and on their first attack they scored. From a scrum near the Ebbw line an attack one way was halted, but when it came back the other way Dan Fish was able to step inside to score Gareth Thompson added the extras as he was to do with all but one of his conversions.

The Blue & Black back row was working fantastically as a unit and from turnover ball space was created for Max Llewellyn to run to within two metres of line, when the ball was recycled Fish was again the man to skip over. Try number three came a couple of minutes later. More turnover ball was sent wide to Sam Beard, and his dink through bounced into Tom Habberfield’s hands and his simple pass to Morgan Allen sent the captain over. Just before the break Thompson added a penalty to send the home side in 24-0 up.

The second half produced try number four straight from the kick off. Llewellyn gathered the restart and beat five or six players before linking with Habberfield. He was pulled down short of the line but the ball was recycled and Ben Thomas produced a lovely pass to send Llewellyn over. He was to provide the fifth as he sent Fish in for his hat-trick. The sixth was a contender for try of the season as Ben Thomas glided outside his man and sent Evan Yardley on his way from 60 metres out, the hooker sprinting down the line to score. Dawid Rubasniak got Ebbw on the board before Cardiff scored again. Ebbw dropped the restart and scrum ball was worked wide to Barney Nightingale. With three men around him he jinked past two and powered over.

The next try came from a charge down. Thompson’s kick was charged down but the ball bounced into Joe Scrivens’ hands, he fed Llewellyn who did the rest from 50 metres. An Ethan Lloyd break lead to try nine. A resulting penalty went to the corner and from the maul Alex Everett crashed over. From the kick off Jim Botham went straight through a gap and 50 metres later he linked with Callum Bradbury who finished the try off. Ebbw grabbed a second from Lewis Young but Cardiff rounded off the evening with try eleven. Ebbw were trying everything but a pass between the legs went loose near the Cardiff 10 metre line. The ball was picked up by Leon Andrews and with no one in front of him he finished off the scoring with Cardiff into the next round 78-12