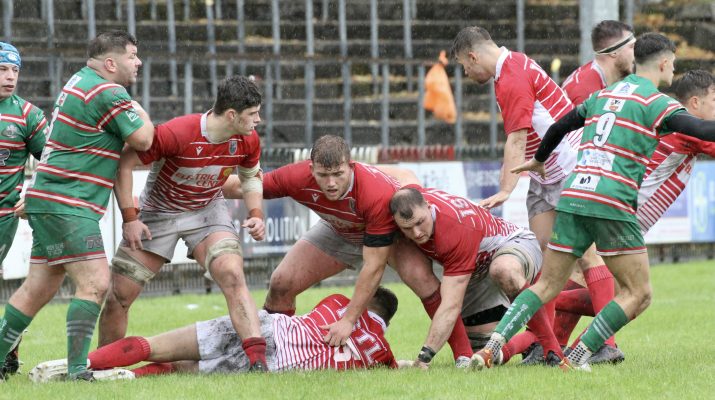 Tries from Iestyn Harris (2), Will Davies-King and Gwilym Bradley, together with a couple of conversions and a penalty by Jake Beetham, saw the Blue and Blacks to a comfortable win in the third round of the Indigo Premiership Cup at Ebbw Vale.

With the rain pouring down, the conditions looked like they may have an impact on the game but both teams played some fast open rugby with just a few handling errors breaking the flow.

A well timed pass from Ioan Evans to Tom Hoppe put Cardiff on the front foot and the scrambling defence conceded a penalty 5 metres from touch. Cardiff kicked to the corner and the driving maul that followed looked sure to cross the line but for some excellent defensive work by Ebbw Vale. Another penalty quickly followed for Cardiff and another driving maul from the lineout. This time it was well stopped before it could make any progress but it freed up the backs to get the ball further infield. Some quick offloading put Sean Moore within inches of the line. With Ebbw Vale’s defence creeping offside, Cardiff decided to take the points from right in front of the posts. Jacob Beetham stepped up and successfully converted the kick.

Ebbw Vale had the chance to show what their pack could do not long after the restart and, from a lineout on the Cardiff 22, they also showed the strength of their maul. As the maul moved in field, the ball was passed back to Lewis Williams for a drop goal attempt 25 metres out. The ball passed just wide of the posts and gave Cardiff a chance to clear from the restart.

The next few minutes involved several kicks back and forth until an Ebbw Vale knock on from a high ball allowed Cardiff to break into the 22 and work through some phases. A no arms tackle on Theo Bevacqua, who did not have the ball, led to a yellow card for Dave Whiting. Cardiff kicked the penalty into the corner but lost the ball forward at the lineout. Ebbw cleared the ball from the resulting scrum but only as far as the 22 metre line.

Another driving maul from the Cardiff lineout and a penalty advantage conceded by Ebbw for collapsing the maul. This time Dan Fish kicked across the 22 for a chasing Beetham to try and catch. He managed to knock the ball back to another Cardiff player and some quick hands offloading the ball back across the field to a waiting Iestyn Harris to run in from 20 metres out. Beetham missed the conversion making the score 8-0 to Cardiff.

The next 5 minutes were spent in the middle of the field with both teams making progress before committing handling errors and turning the ball over to their opponents. Until a 50-22 kick from Fish gave Cardiff an attacking platform just 11 metres off the Ebbw Vale line. From the lineout, Cardiff drove the maul to within a couple of metres of the line before it was deliberately collapsed by Ebbw Vale. Not wanting to wait for the penalty, Cardiff recycled the ball quickly to Will Davies-King to power his way over the line. Beetham add the extras to make it 15-0 to Cardiff. That signalled the return of the Ebbw Vale prop after his 10 minutes in the sinbin.

The weather played its part in the final 10 minutes of the half as neither team was able to build much momentum before dropping the ball and turning over possession. Ebbw Vale did manage to earn a penalty with a strong scrum just outside the Cardiff 22 and opted to take the points. Lewis Williams slotting the ball between the posts to make it Ebbw Vale 3 – 15 Cardiff at half time.

The second half began in much the same way as the first ended. A territorial kicking game with several handling errors meant most of the action remained in the middle third of the pitch. Ebbw Vale knocked on from a lineout inside their own 22 and gave Cardiff the opportunity to attack from the resulting scrum. The ball went through 2 phases before a chip through from Fish led to a foot race between Gwilym Bradley and Jake Thomas to dive on the ball over the try line, before it went dead. Gwilym was there first to score Cardiff’s third try of the game. The conversion was missed, leaving the score 20-3 to Cardiff.

Another 50-22 kick from Fish, just minutes after the restart, gave Cardiff an attacking lineout 7 metres out. The Cardiff lineout turned into a driving maul that was illegally collapsed by Ebbw Vale. Iestyn Harris broke away from the resulting maul and was brought down less than a metre from the line. Two phases later and the referee returned for the penalty and awarded the second Ebbw Vale yellow card of the game, this time to Dan Hill. The penalty was kicked to the corner, the lineout turned into a maul, and Iestyn Harris crossed the line at the back of the maul to score his second of the game and secure the bonus point for Cardiff. Beetham added the extras to make it 27-3 to Cardiff.

After that try, the rain stopped and the sun began to appear. As the weather began to improve, the rugby got worse. Ebbw Vale were awarded a penalty inside the Cardiff 22. They kicked to the corner and their driving maul was well defended by Cardiff who managed to secure a penalty for holding on as the players broke from the maul and were tackled 2 metres out. Cardiff cleared their lines and used the opportunity to bring on 6 sets of fresh legs.

The final 20 minutes saw Cardiff’s attack matched by Ebbw Vale’s defence and much of the period was spent inside the Ebbw 22. Full time score, Ebbw Vale 3 – 27 Cardiff.

I'm a regular attendee at home and away games for Cardiff RFC and Chair of the Marketing & Media group so can often be seen on match days with a phone in my hand updating the Cardiff RFC social media or the website. I'm also a committee member for both Cardiff RFC and Cardiff Rugby Supporters Club.