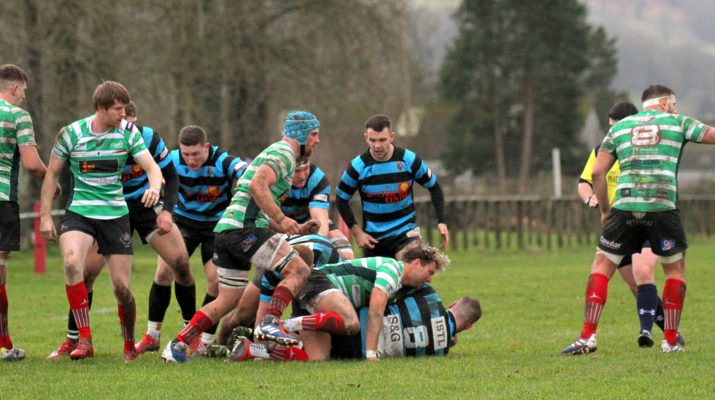 Cardiff extended their unbeaten run in a tough game at Church Bank.

The Blue & Blacks made the perfect start to the first half. Three penalties gave them field position and when a lineout drive was stopped the ball was worked into midfield by the forwards, they too were stopped but the ball was spun wide and Edd Howley was able to use the space to score from short range. Gareth Thompson was wide with the conversion but extended the lead with a penalty a few minutes later.

Jack Maynard got the Drovers on the board with a penalty fifteen minutes in, and when Cardiff were reduced to fourteen the home side took the lead with a penalty try. Cardiff were then reduced to thirteen and were forced to defend. There is a saying that the best form of defence is attack and Cardiff certainly put that adage into practice to end the half on the front foot forcing the Drovers into some frantic last ditch tackling to defend their line .

The second half started with Cardiff back on top. A break down the blindside by Tom Habberfield allowed Edd Howley to dart into the Llandovery twenty-two. When he was tackled the ball was recycled and Jason Harries powered towards the line before feeding Thompson who scored from short range and then added the conversion. The lead was extended with a penalty 12 minutes into the second half. Maynard then reduced the deficit five minutes later having previously missed a couple of minutes early from a similar range. Cardiff came straight back and recovered the ball straight from the kick-off. When it was moved wide Teri Gee made a blistering break and was able to beat the last man to score a fine individual try. Thompson added the extras to take his career total over 900 points. Aaron Warren scampered over in the corner to draw the Drovers closer and Maynard made it a one try game with a few minutes left. Resolute Cardiff defence was the order of the last few minutes to take the points.