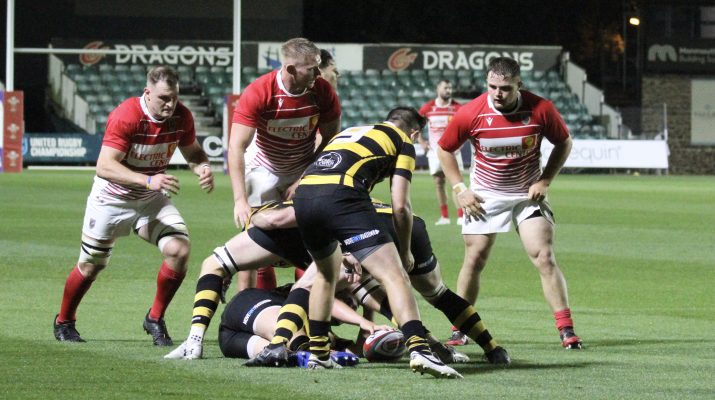 And the start they got at Newport looked like they were in the mood to continue that form. An early penalty went wide but form an error at the restart a scrum move saw Ryan Wilkins put Harri Millard straight through a hole to score a try that Jack Maynard converted.

Newport were stung into action and a series of penalties saw them gain a lineout near the Blue & Black line- Ben Roach going over to level the score. Cardiff were back in front shortly after. A kick through by Millard bounced away from the Newport defence, Jake Thomas pouncing to score. The back and forth nature of the game saw the Black & Ambers level the scores before half time as Oli Andrew gathered a kick to score.

Cardiff’s discipline in the second half seemed to disappear as a series of penalties allowed Newport to edge ahead. Will Reed landed a penalty that was cancelled out by Jack Maynard shortly after, but the penalty count was rising quickly against the Blue & Blacks stopping any momentum. Ioan Evans landed a monster penalty to give Cardiff the lead but Reed levelled the scores shortly after. And his winning score was to come close to the end as Cardiff were penalised for obstruction. The Blue & Blacks did have one final throw of the dice, but that was snuffed out by the Newport defence for a 23-20 win.