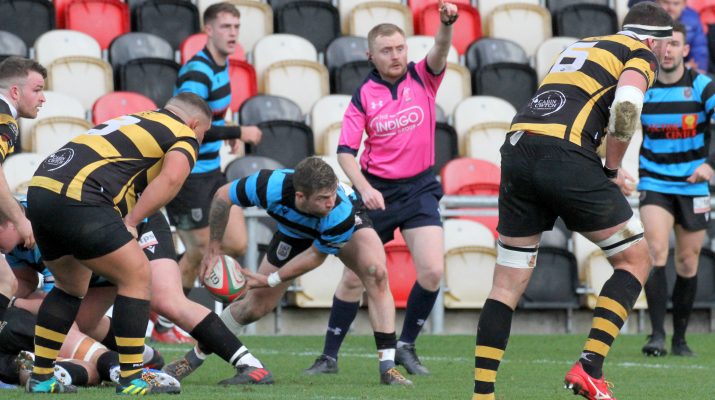 Cardiff maintained their unbeaten start to the Indigo Premiership with a bonus point win at Rodney Parade.

Before the game a joint bucket collection raised over £350 for former player Steve Taylor, and a minutes silence remembered John Barrett of the Newport trust.

Playing into the wind in the first half the Blue & Blacks made the better start, putting pressure on the Black and Ambers line. But the final pass just wouldn’t come and it was the home side that were first on the board. A Cardiff mistake gave them filed position, and when they ran at the defence a gap appeared for Josh Skinner. He fed Elliot Frewen to score a converted try.

Cardiff came straight back and a Newport were reduced to fourteen they took full advantage. From a lineout close to the line the forwards powered over the line, James Thomas at the bottom of the pile, Edd Howley levelling the scores with a wide conversion. And the visitors should have gone further ahead as Sam Beard carved his way through, but with final pass went to ground just as it looked like the score would be awarded.

Cardiff’s second try was the best of the four. A loose kick by Newport was collected by Tom Habberfield. He spotted space and sent Dan Fish on his way, his simple draw and pass sent James Beal over in the corner. The third try came shortly before half time. Another penalty was sent into the corner. This time the drive was repelled, but a few pick an goes in centre field drew in defenders and Sam Pailor was able to power over dragging Black and Amber defenders over the line with him. Howley converted for a 19-7 half time advantage.

As the second half began so did the rain, drifting into the home defenders faces. The game began to get scrappy, but the Cardiff lineout catch and drive was still a very effective weapon. Another penalty brought the bonus point try. The ball was again sent into the corner and when Callum Bradbury grabbed the throw there only looked like one result, Evan Yardley at the back to plough over.

The rest of the half was a very messy affair, with the ball on the floor for a lot of the last twenty minutes, but Cardiff had their points and will move on to the next test against Champions Merthyr next Saturday.