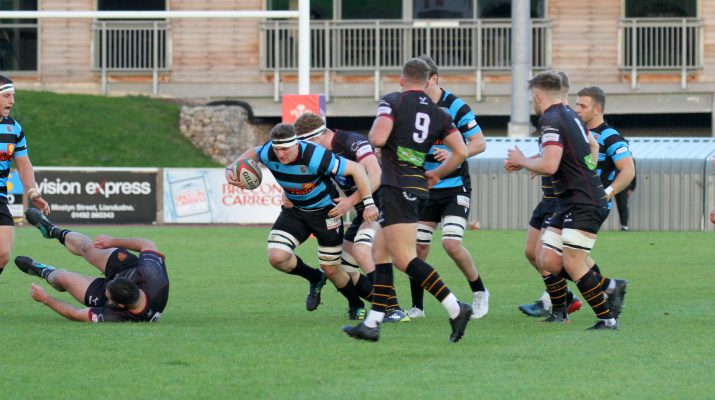 Having won at Parc Eirias in the Cup in September the Blue & Blacks were looking for a repeat in the League and had the best possible start. Within two minutes the scoreboard was moving in their favour. From the kick off the visitors managed to pressure RGC into a rushed clearance and when the lineout off the top ball was moved into mid-field the second wave saw Gareth Thompson send Alex Everett cantering over, Thompson added the extras.

It got better when Thompson added a penalty, that advantage was cancelled out by a Billy McBride kick and he was on target again with the conversion of the home side’s first and second tries as RGC took the lead. Rhys Tudor going over for both scores to send the home side in at half time 17-10 up.

Cardiff had shown that the maul was a weapon that could cause immense damage, only an infringement in the first half cancelling out a try for it and when it was used it yielded plenty of penalties. Early in the second half one of those was shunted into the corner and there was no stopping Ethan Lewis again as he crashed over, Thompson levelled the scores with the extras.

Cardiff went further ahead a few minutes later with an individual score from Barney Nightingale. The lineout was again caught and driven but when it was halted the ball was moved infield. Nightingale came in on a great line and although he was tackled he wasn’t held so he got up and sprinted over. RGC would not though lie down and they came right back into the game with their third try, and Tudor’s hat-trick, the conversion though went wide.

Two points ahead with ten minutes to go and the game was in the balance. Cardiff though controlled the game right to the final whistle and right on eighty minutes the Blue & Blacks were awarded a penalty thirty metres out. With a maul that had been working all game the visitors went for the bonus point. The lineout was caught and when the drive came on the backs joined in. As the maul went over the line Dan Fish was at the back to score the fourth try and keep the Blue & Blacks at the top of the table.