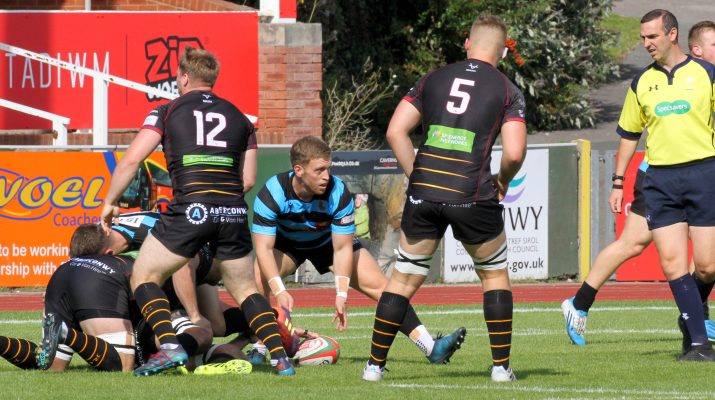 Cardiff win in style as they start the defence of the National Cup at RGC.

Cardiff began their defence of the National Cup with a trip to RGC. With kick off delayed the visiting fans were able to watch the wind turbines down the distal end of the ground. There were no puffins or wombles to be seen but plenty of entertaining running rugby on the horizon. It was the sort of game that would have suited Will Rees-Hole perfectly.

Cardiff started strong and turned the early pressure into points thanks to trys from Jack Brooks and Morgan Allen. Both were converted by Gareth Thompson. With Cardiff up 14-0, RGC began to play some good rugby and brought the game back to 14-14 after 35 minutes with trys by Will Bryan and Afon Bagshaw. Minutes later, Leon Andrews crossed the line to regain the lead for Cardiff and Morgan Allen extended the lead with a move straight out of Strictly Come Dancing. With half time approaching, Callum Bradbury was yellow carded deep in the Cardiff half and RGC made the most of the man overlap to allow Rhys Tudor to score a late try. Half time score RGC 19 – 26 Cardiff.

The second half was a slower affair with just 3 Cardiff penalties being converted, by Gareth Thompson, in the first 30 minutes of the half. RGC had several chances to claw back some points but opted for a scrum. Cardiff’s scrum was beginning to click and they managed to turn the RGC scrum into a Cardiff penalty to clear their lines. RGC put a few good moves together to allow Robin Williams to score a try but it looked like that would be the final points of the game. Until, Barney Nightingale scored with the last play of the game to secure the win for Cardiff. Final Score RGC 24 – 40 Cardiff. It was back to the clubhouse to celebrate a win and birthdays for Sam Pailor and Laura Whittle with a Curly the Caterpillar cake.

The next round of the cup is the weekend of the 9th November.