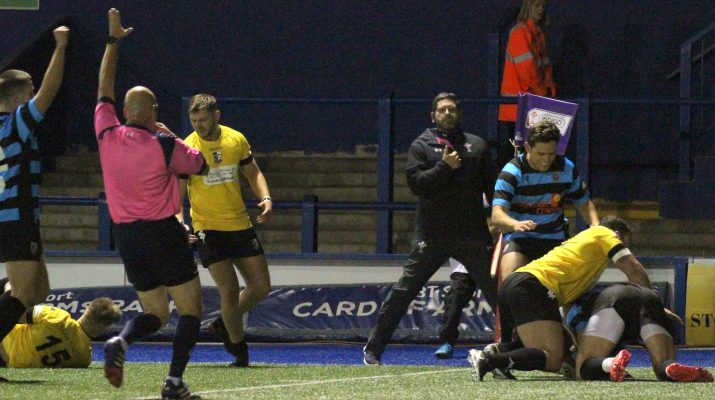 Cardiff and Pontypridd gave the new Indigo Premiership a thrilling start at the Arms Park.

Playing in unfamiliar yellow Ponty were forced to defend early in the game and the first try came after five minutes. Off the top line out ball on the half way line was moved into mid-field and when Joe Gatt came into line he was able to slice through the Ponty line into open space. His pop pass to Edd Howley giving the fullback a simple run in. Gareth Thompson added the extra two.

Cardiff continued to set the pace as the forwards were getting into the game and Morgan Allen and James Ratti both enjoying running straight at the Ponty defenders. But the visitors defended well and started to get into the game, albeit from scrappy ball. When they did have they only manged to find Gatt who headed straight towards the line. Sam Beard was in support but when he was pulled up short Ratti was on hand to pick up at the base of the ruck and power over. Thompson slotted the conversion.

On the rare occasions that Ponty did manage to get into the Cardiff half the Blue & Black defence was well up for the challenge, repelling the attacks and turning ball over to release pressure. But a mis-communication from a scrum allowed Dafydd Lockyer to go straight through a hole to score. Ben Jones converted as Ponty were getting more and more into the game. But normal service was resumed and Cardiff defended their line before marching downfield again. Gatt and Howley were involved in a move that sent Cardiff into the Ponty twenty-two but the ball went loose and Nigel Owens blew for half time.

Pontypridd made the better start to the second half and Ben Jones cut the deficit by three with an early penalty. Thompson replied in kind shortly after but when Cardiff were reduced to fourteen men Ponty took advantage. A rumble towards the line didn’t manage to get over but from the scrum Gareth Webber went blind and offload to Morgan Sieniawski who went over in the corner. Jones landed the difficult conversion.

And Ponty were to take the lead soon after. Jones kicked a penalty after Cardiff were penalised at a ruck. As replacements started to come onto the field the game had a change of referee. Nigel Owens damaged his calf and was replaced by Gwyn Morris. We wish Nigel all the best as he heads to the World Cup and his first game another derby – Japan against Russia. Jones extended the lead with another penalty before the game had a grandstand finish.

Cardiff set up camp in the Ponty twenty-two. A lineout was pulled down illegally just short of the line. A scrum was called and as the ball squirted out Ben Williams scampered towards the line. He was held up but the ball was recycled. Several drives at the line were repelled, but the ball was being controlled and when Joe Scrivens found Howley the full back evaded the tackles to score in the corner as the clock went red

That just left the conversion. Scrivens lined up the difficult kick and kept his nerve as the ball sailed between the posts to give Cardiff a deserved one point win.