The club is saddened to hear of the passing of former Cardiff player Eddie Lewis, at the age of 93.

After making his debut against Gloucester in November 1954, back row forward Lewis went on to make over 80 appearances for the Blue & Blacks, scoring 5 tries – his final game being at the start of the 1959-60 season (against Bridgend). 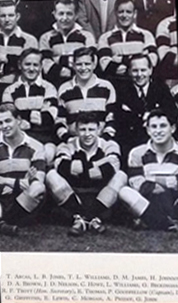